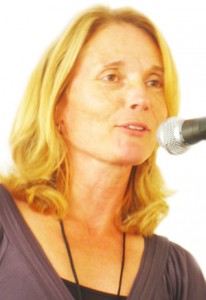 As part of a catering crew, Susin Nielsen-Fernlund of Vancouver got her big television break in the off-camera cafeteria for the program Degrassi Junior High. “They hated the food—but they loved my writing.” After scripting 16 episodes of Degrassi and tons of TV writing credits later, plus a Gemini Award, she realized her ambition to publish a children’s book after her son Oskar was born in 1996. Now Susin Nielsen’s We Are All Made of Molecules (Tundra $19.99) tells the story of two unlikely teenagers being thrust together when their their parents combine households. Thirteen-year-old Stewart Inkster is the proverbial nerd: head of his class but socially awkward. Fourteen-year-old Ashley Anderson is the “it” girl of her grade nine class. Ashley is mortified and hasn’t even informed people her parents are divorced; Stewart tries to make the best of the situation. The story of their overlapping journeys tackles issues such as bullying, bigotry and tolerance, as well as the true nature of friendship and what it means to be a family.