Storm Rising is no secret 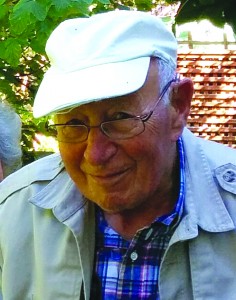 It’s a tad bizarre. But Vernon Brooks, at age 92, has self-published a book that is his movie treatment for a dramatic historical film or made-for-TV mini-series.

Entitled Storm Rising: A Movie Treatment (Agio Publishing 2015), the film treatment purportedly tells a true story of espionage and aeronautical design based in part on the unpublished memoir of a Canadian man named Beverley Shenstone, his late wife’s first cousin.

Brooks is not concerned with protecting the secrecy of his idea for a movie “Shenstone’s life story is so incredible,” he says, “that I want it made into a movie so people can be inspired by his example” According to Brooks, Shenstone was an unsung hero who secured work in the Junkers factory in Germany during World War II with the help of British intelligence. Because he was a brilliant aeronautical engineering grad, Shenstone collaborated with Germany’s top aeronautical designers before MI6 was able to extricate him in the proverbial nick of time. Shenstone was put to work in Southampton re-designing the Spitfire’s prototype wing. The proposed film Storm Rising would show how the ‘nerdy’ young Canadian enabled the British plane to be superior to German planes, leading to victory in the Battle of Britain in 1940.

A book launch and a detailed public sales pitch for the movie occurred at the BC Aviation Museum, at the north side of YYJ airport, at 1910 Norseman Road–where there is a 3/4-scale replica Spitfire on display—on May 10th, 2015

The contents of the published book (available in paperback through POD worldwide, and in ebook format) are the components of proposal document to be presented to prospective producers. There is a logline, synopsis, plot outline, sample screenplay scripts, casting notes, potential side stories and links to background research.

Retired neuroscientist Vernon Brooks was born Werner Bruck in Berlin, Germany in 1923 into an assimilated Jewish family. He was evacuated to Britain by kindertransport in 1939 and completed his secondary schooling in an internment camp for ‘enemy aliens’ near Farnham, Quebec, before attending University of Toronto (BA), University of Chicago (MSc) and University of Toronto (Ph.D). Bruck attained Canadian citizenship after his BA and changed his name to Vernon Brooks. As a pioneer in studies of the neural basis of motor control and motor learning, he held appointments at McGill University, Rockefeller University, New York Medical College and University of Western Ontario (London, Ontario). Dr. Brooks now lives in Victoria.

One Response to “Storm Rising is no secret”