How Gail got her groove back 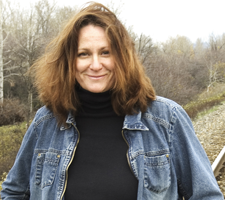 Lately some high profile female writers have been putting their names on books for children and reluctant readers. Poets Susan Musgrave and Lorna Crozier have contributed a few lines for simple board books for toddlers—with Musgrave’s Love You More (Orca $9.95) and Kiss, Tickle, Cuddle, Hug (Orca $9.95), both illustrated by Esperanca Melo, and Crozier’s And Lots of Kisses (Orca $9.95)—and novelist Caroline Adderson has released A Simple Case of Angels (Groundwood $9.95) for children aged 8 to 11.

With If It Bleeds (Orca $9.95), January Magazine creator Linda Richards has entered the new Rapid Reads niche. Her heroine Nicole Charles didn’t attend journalism school to become a gossip columnist, but with jobs scarce she takes the job until something better comes along. As Nicole struggles with the stigma attached to her type of journalism, she begins to think she’ll never have a real reporting job. When she discovers the body of an up-and-coming artist in a dark alley, she finds herself in the middle of the biggest story of the year.

For the past decade or so, acclaimed novelist Gail Anderson-Dargatz has been busy with parenting, step-parenting, the death of both parents, divorce, remarriage, a move, another move, and teaching writing from her Shuswap home in UBC’s optional-residency CW MFA program. Having just turned fifty, here she describes how she recently regained her literary verve with Search and Rescue (Orca $9.95), a thriller for her new Rapid Reads series about smalltown journalist, Claire Abbott, who solves crimes in rural B.C.

TO DANCE WITH A CAT

In the last five years, I fell out of love with my writing life. Aside from having little time to write, I found myself feeling that I had to write like the person I no longer was, this “Gail Anderson-Dargatz.” My writing name is not my personal name and hasn’t been for a decade. My husband calls me by my middle name, Kate, and I took his name when we married.

So there I was in mid-life, another person. More than that, I was no longer sure what stories I wanted to tell. I was proud of my early work, but I had grown beyond that person who had written those books. I felt pressure, real or imagined, from the publishing industry to continue to write as “Gail Anderson-Dargatz.”

I know I’m not alone here. Falling out of love with writing is something that happens to most writers, and not just in mid-career. We fall out of love with nearly each project and, especially when writing a novel. As is the case with any long-term marriage, there are bland days when we wonder why we started this damn thing in the first place. Or, even worse, we fight with a story that isn’t working. We think of giving up and leaving the project altogether.

Sometimes, as in a bad marriage, we should leave it. Some projects are just practice, where we learn a thing or two, like the relationships of our twenties, when we experiment with lovers until we find a good match. Even when we do find that good match — the writing project that “fits” — there will be days when we want to give up, when we seem to have fallen out of love.

How do we heal our relationship with our writing life in general? How do we reignite that spark?I think I’m beginning to figure it out. I believe the key to keeping any long-term relationship thriving lies in making time for that love, and in bringing back play. Just as we do with our partners, we need to make the time to be with our writing.

We often fall out of love with our writing simply because we don’t have the energy for it. When we’re not at work, we’re chasing our kids or overloaded by domestic demands. It’s hard enough to find time to romance our partners, much less our writing.

If that writing life is important to us, however, then we must find that time and energy to romance it, almost daily. I say ‘almost’ because breaks are important. We need time away from our kids and lovers to charge up, to appreciate them. The same is true of writing.

To stay in love with writing, we need to make it a daily habit, one we return to because we want to, because we’re driven to, not because we have to. Here was where I ran into trouble. Between my responsibilities as a parent to four kids, as a daughter to aging parents, as a teacher, and as a wife, I had very little time left to romance my writing.

I had also lost the ability to view my writing as play. As pros, we often come to think of our writing as work, and defend it as such, as something we must do, we should do. There’s nothing like a “should” to take the joy out of any activity.

Writers often ask me how I stay disciplined, how I keep writing. I tell them I do my best not to discipline myself to write. When I make it work, it feels like work. Despite what I told these writers, however, writing had become work for me. Writing was how I made my living. I wrote for a purpose now, and not for play. And so, I lost energy for it.

I see the importance of play at work most keenly with my children. My two youngest love to write. My youngest son had two novels on the go before the age of twelve. My daughter writes poetry and picture books for fun. For fun. These kids aren’t worrying about getting published, or finding an agent, or getting decent reviews. They are writing for no other purpose other than to play.

My son learns through a distributed learning program, at home. He’ll spend the day writing on his own initiative, because he loves it, but when he’s given an assignment to write by his teacher, his creativity stalls. He can’t think what to write. When he’s writing for a purpose, someone else’s purpose, his writing stalls.

I remember that the feeling of play, the joy of the white page. The possibilities! I wrote for that bubbly feeling I now see crossing my children’s faces as they write their fiction, that feeling of wonder that came when I engaged my own imagination, when I was there, inside the world of my writing. I wrote for no purpose other than this.

Then I published, gained some measure of success. Writing became work and the experience changed. I was writing to a purpose, to publish, to win competitions, to garner attention, to get an agent, to get an editor, to keep my editor, to win bigger awards, and so on. I had grown up and forgotten how to play.

It changed for me—for the better—when I took on writing for adults struggling with literacy issues; first through the Good Reads program, then through Orca’s Rapid Reads series. In the process, I explored commercial novels, looking for that clear narrative arrow, the fast-paced plot, the page-turner so necessary in engaging a new reader.

I discovered I really liked writing young adult and children’s fiction. It’s fun! I could quit being so damn earnest, so literary. I find myself forgetting about what others might think of my fiction, my literary fiction. In short, I’m allowing myself to play again, to write not for an audience, but for myself.

I feel a little giddy, as if I am genuinely falling in love again, with the writing process. The days I worry about what my agent/editor/reviewer/reader will think are the bad days, when the writing stalls. The days when I don’t give a shit what anyone will say are the good writing days.

So I now stumble some days, and dance others. I suspect it will take me some time to fully rediscover that place my son and daughter intuitively and naturally write within. Like them, and like the writer Lucien in Michael Ondaatje’s novel Divisadero, I’m learning, once again, “to dance with no purpose, with a cat.”
—

Gail Anderson Dargatz is currently at work on her fourth novel for adults. An earlier version of this essay appeared in Event.

One Response to “How Gail got her groove back”