Adopted into a new tribe 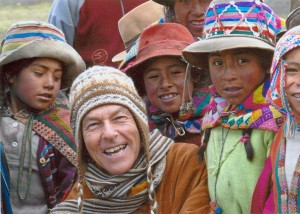 During several visits to the Andes Mountains, prolific self-publisher and historian Adolf Hungrywolf met with Andean shamans–men and women–and was adopted into a village.

He has self-published a book about his South American experiences, Mystico: Life with the Mountain Spirits from his Good Medicine Books imprint in Skookumchuck, B.C.

Adolf Hungrywolf, an adopted member of the Alberta-based Blackfoot First Nation, is the foremost published historian of the Blackfoot First Nation and the author of more than forty books. His new 311-page book Mystico has over 100 photos, drawings and sketches of the Andean people and their environs.

Here Hungrywolf describes what enticed him to travel so extensively among these mountain people. As a leader of traditional Blackfoot ceremonies and a constant wonderer of the Canadian Rocky Mountains, I had long yearned to visit the Andes of South America and meet some of the mountain people there. In 2007, I fulfilled my wish, spending two and a half months with descendants of the Incas who live in remote places of the region that is home to other famous sites such as Machu Picchu, Lake Titicaca, Cuzco and the Sacred Valley.

Prior to embarking on my trip I had a dream that Wolf Old Man, one of my wise and elderly Blackfoot teachers from more than forty years before, appeared and advised me to seek a certain ‘mountain man’ when I reached my destination. He told me that I would receive something special from this mountain man.

During the first month of my trip that goal was always in my mind but no one I met fit the description. Eventually I put the idea aside. No sooner had I done this when a young native taxi driver named Rolando Huallpa heard my story and offered to take me to his boyhood mountain home, an isolated slope at 12,000 feet, where he knew someone who fit my ‘mountain man’ description.

That man turned out to be Bueno Venturo Hancco Quispe (his first two names mean ‘good venture’). As soon as I met him, Bueno Venturo broke into a big grin showing lips and brilliant white teeth stained with green coca plant juice. His dark eyes bored deeply into mine out of an equally dark face. He was wearing a vividly coloured poncho that covered his upper body and black homespun woollen pants that ended below his knees. The rest of his legs were bare, dark and muscular.

I knew instantly that he was the one. Perhaps he felt the electricity of our meeting as well because he did something he hadn’t done with any outsider before in his fifty-some years of rugged mountain life and ritual studies: Bueno Venturo shared his ceremonies with me.

We became adopted brothers after that – a custom as common among Venturo’s Quechua people as it is among the Blackfeet back home. My young taxi driver friend Rolando – whose own father was murdered along a trail when he was just a small boy – introduced me to everyone as his long lost ‘papa,’ while I explained that I had three grown sons his age back home in Canada who call me the same thing.

I had further visits with Bueno Venturo and also with other shamans – men and women. All were people that Rolando and I reached by hiking over rugged trails in the mountains. At one point he nearly got me married to his widowed aunt Juliana, who lives with her sheep and llamas in an unheated hut at almost 14,000 feet.

I continued to visit the Andes since that first journey. After my second trip I received word that by brother Venturo had been brutally murdered. So I went back for a third time to check out what had happened. I had also received invitations from other families living in remote and traditional Andean villages. They wanted me to join them for their annual ‘pukllay’ rituals, which are usually held in secret far from tourist places and during the inhospitable rainy season.

I share these stories in my book as well as many comparisons between the Andean mountain people and the Rocky Mountain people where I live. I hope it will inspire some readers to venture off the popular Andean tourist trails to seek the wonderful spiritual guides who live in more remote areas.

Fifteen of Adolf Hungrywolf’s approximately fifty books are about railroading, including Vintage Cubano: Adventures with Old Cars, Antique Trains, and Friendly People (Hayden Consulting $60 U.S.), a retrospective gathered from 1993 to 2005 when he spent 18 months in Cuba.

He recorded hundreds of narrow-and standard-gauge locomotives and countless old American cars for a 320-page, all-colour book. Hungrywolf took his first photo of Canadian railroading in 1963, at age nineteen, of a steam locomotive having its tender filled from a wooden water tank along a forest branchline on Vancouver Island.

Since then he’s taken thousands of photos of Canadian railroading, and gathered thousands more, dating back to the 1870s. He intends to produce a cross-Canada magnum opus on railroading called Vintage Canadian, showcasing 600 colour slides and 800 b&w photos.