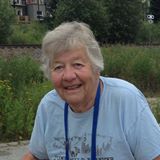 Jennifer Craig’s self-published novel of humourous, social commentary, Mary-Lou’s Brew (Friesen $17.99), sounds a bit like Harry Potter for adults. It is a whimsical tale of a contemporary academy, rooted in ancient Greek culture, “written by a Yorkshire woman who knows her science and her brews.” The future of the Academy of Sophists is in jeopardy. Faculty members vanish, an assistant causes a unique traffic jam, lab creatures escape, and a disenchanted junior professor tries to alter the Dean’s Gravity Quotient. Life gets more complicated for everyone when Mary Lou stirs up her brew, spelling more trouble for the Dean of the Academy of Sophists. According to Craig’s publicity, “The Dean’s Academy of Sophists contributes to humanity in its own whacky way, using ancient practices similar to witchcraft, but with a scientific basis. Although Sophistry and witchcraft parted ways in the fifteenth century, the Dean must defend the Academy against those who see these goings-on as decidedly witchy–with hilarious results. 978-1-4602-4484-5