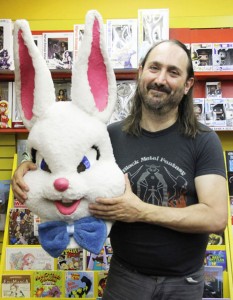 Hard to believe, but the 30th annual JCC Jewish Book Festival (Nov 22-27, 2014) is now well into its planning stages. Only the Festival of the Written Arts in Sechelt, started by Betty Keller, is older in B.C.

Each year the Jewish Book Festival features writers from across Canada, the US and Israel for a week packed with literary events including meet-the-author opportunities, literary readings and panel discussions,  the annual book club gathering, writing and self-publishing workshops, children’s authors, film-screenings and two onsite bookstores – new and used. The Festival offers something of interest for every age group and every literary taste.

This year they’ve added s a pre-Festival foodie event  with Israeli-born Yotam Ottolenghi, billed as  a culinary superstar, in conversation with CKNW host and foodie, Simi Sara on October 21. Multi-faceted Mark Leiren-Young was recently chosen as Vancouver’s first Jewish Literary Laureate, a new distinction shepherded into existence by cultural activist Yosef Wosk. Mark Leiren-Young is a screenwriter, playwright, performer, freelance journalist and a recipient of the 2009 Stephen Leacock Medal for Humour for Never Shoot a Stampede Queen: A Rookie Reporter in the Cariboo (Heritage 2008). He also wrote, directed and produced the feature film The Green Chain—a documentary-style drama about a dying B.C. logging town.

“The Jewish Book Festival is a wide-reaching and inclusive event that reaches out to readers from all cultures and religions,” says Festival director, Nicole Nozick. “Jewish writers don’t write only about Jewish subjects – their themes are universal: family relationships, love, humor, history. There is something for everyone with our diverse and entertaining selection of celebrated authors and panelists.”

Another example of a featured author exploring subjects beyond a distinctly Jewish focus is veteran folkie Bob Bossin of Gabriola Island. In conjunction with his one-man musical, Songs and Stories of Davy the Punk, Bossin has published Davy the Punk (Porcupine’s Quill 2014), the hitherto untold story of his father’s life in the gambling underworld of Toronto during the 1930s and ’40s.

Bossin writes: “My father, as I knew him in the 1950s, was a quiet, conservative man who booked acts into night clubs around Ontario. But before that, in the 1930s and 40s, he had been “Davy the Punk,” his nom de guerre in the gambling underworld. Suffice to say, Davy was not a man who kept a diary; “Bobby, what you don’t say can’t be held against you,” he warned me. But the Attorney General of Ontario and the cops, who doggedly pursued my father from the late 1930s on, wrote volumes about him. Bad for him, good for me.

“Davy died in 1963 when I was 17, but after a chance encounter in a Toronto deli alerted me that my dad had once been Davy the Punk, I began to follow his trail. I talked to his old pals, tracked down old bookies, cops, judges. I haunted newspaper morgues and archives, placed Freedom of Information requests. It is amazing what you can find out about a secretive man who died 50 years ago. In the course of following Davy’s trail, I discovered the dark side of Toronto the Good and a missing chapter in Canadian Jewish history. And all along the way I uncovered outrageous scams and schemes perpetrated by characters straight out of Damon Runyon or The Threepenny Opera.”

The Jewish Book Festival program guide is available at select locations throughout the Lower Mainland after October 15, 2014. All events take place at the Jewish Community Centre of Greater Vancouver (950 West 41st Ave @ Cambie).