In 1983, hundreds of thousands united for justice and human rights, fighting against repressive new laws in B.C. 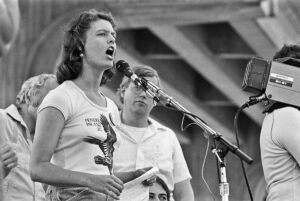 One of the largest, most broad-based political protests in Canadian history gets its due in a new book by David Spaner.

On a single, unforgettable day in B.C.—July 7, 1983—26 government bills came down the chute striking at the very heart of longstanding union and societal rights. Oversight of human rights, tenant rights, employment standards and more was abolished. Government employees had their contract gutted and all public sector employers in the province were given the power to fire employees without cause.

It was truly a revolution of the right wing.

People fought back with a revolution of their own. Under the banner of Operation Solidarity, occupation actions and record large protest marches took place across the province. When nothing changed, there was job action that brought B.C. to the verge of an all-out general strike.

Despite these dramatic events, nothing of any depth has been written about it, beyond labour historian Bryan Palmer’s useful but overly-partisan book, Solidarity: The Rise and and Fall of an Opposition in British Columbia (New Star, 1987) published 35 years ago, and last year’s Tranquille & Battle for Community Care in B.C. (Nightwood, 2020) by the late Gary Steeves on the three-week occupation of the Tranquille residential facility in Kamloops.

Solidarity: Canada’s Unknown Revolution of 1983 (Ronsdale $21.95) is a welcome addition to the surprisingly thin library of books on one of the largest, most broad-based political protests in Canadian history. Over four turbulent months in the summer and fall of 1983, hundreds of thousands of British Columbians were caught up in the massive fightback against the wave of repressive legislation brought in by Premier Bill Bennett’s freshly-elected Social Credit government. 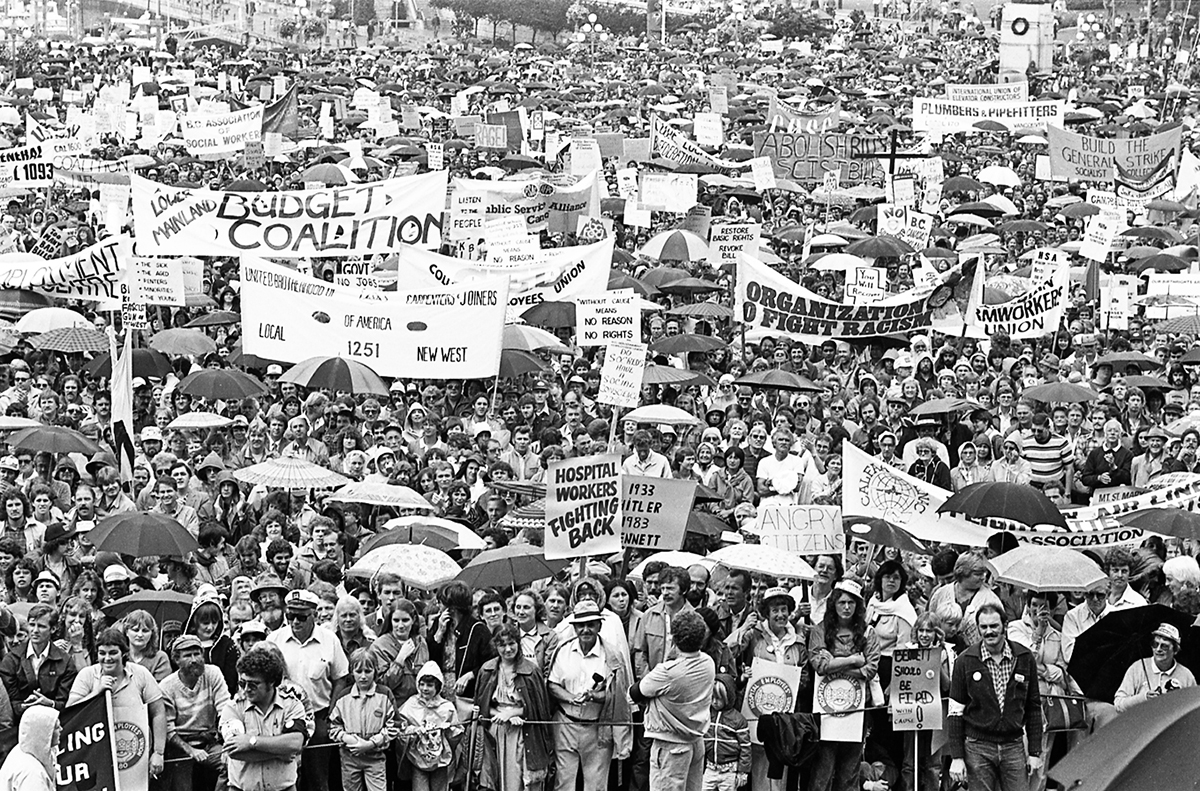 Solidarity is far from a comprehensive history. That remains to be written. Rather, David Spaner focuses on the non-union partner of Operation Solidarity, the Solidarity Coalition. There is comparatively little about unions and the labour movement, which, after all, co-founded and co-funded Operation Solidarity with the Coalition, as well as providing the picket line muscle that started the uprising down the path to a general strike. There are background bios of many of the activists featured in the book, giving it a folksy feel, but not much about Coalition leaders Renate Shearer, Father Jim Roberts and the fascinating history of BC Federation of Labour president, Art Kube who also headed Operation Solidarity.

Concentrating on the Coalition, where Spaner’s sympathies lie, is not a bad thing. Largely ignored by a media that concentrated on a “what next?” mentality, it’s a story that cries out to be told. But the result is an incomplete, somewhat one-sided account.

The Coalition was the broad-based organization of community advocates, activists and social movements that drove the fight on social issues. Stretching into every nook and cranny of the province, they represented the heart and soul of Operation Solidarity, giving it credibility and proof that it was more than a self-interested crusade by unions. The welding of these two disparate groups—the inspired brainchild of Art Kube—was unprecedented. Operation Solidarity would never have been the force it was without the Coalition. 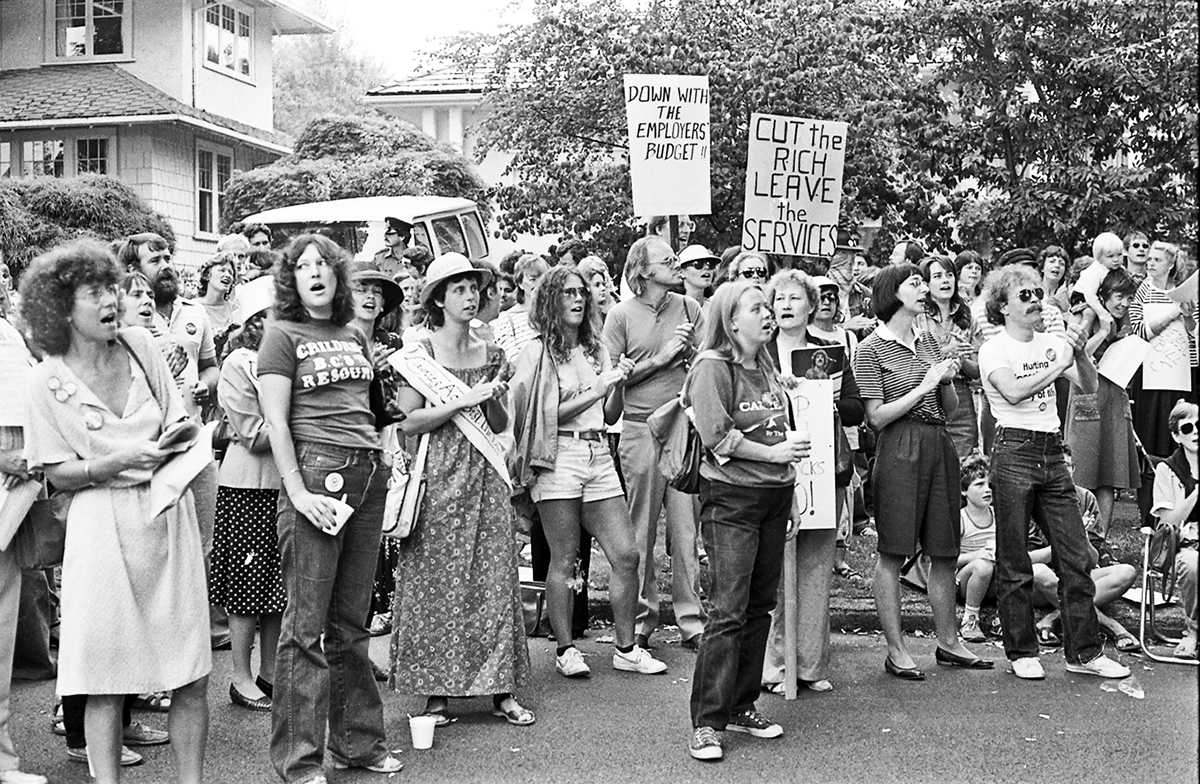 It is refreshing to revisit those heady times through the eyes of those who threw themselves into the Coalition. Spaner provides good descriptions of the endless organizing, unwieldy but respectful marathon meetings, and grassroots decision-making that went on. The chapter on feminism and the strong role played by women in the fightback is particularly good. “It brought all those people together in such a short period of time,” participant and now speaker of the Legislature, Raj Chouhan tells the author. “It was quite a phenomenon, you know, like when you saw people from the faith groups, socialist types, or women’s rights, suddenly together.” They galvanized many British Columbians to join a protest for the first time in their lives. 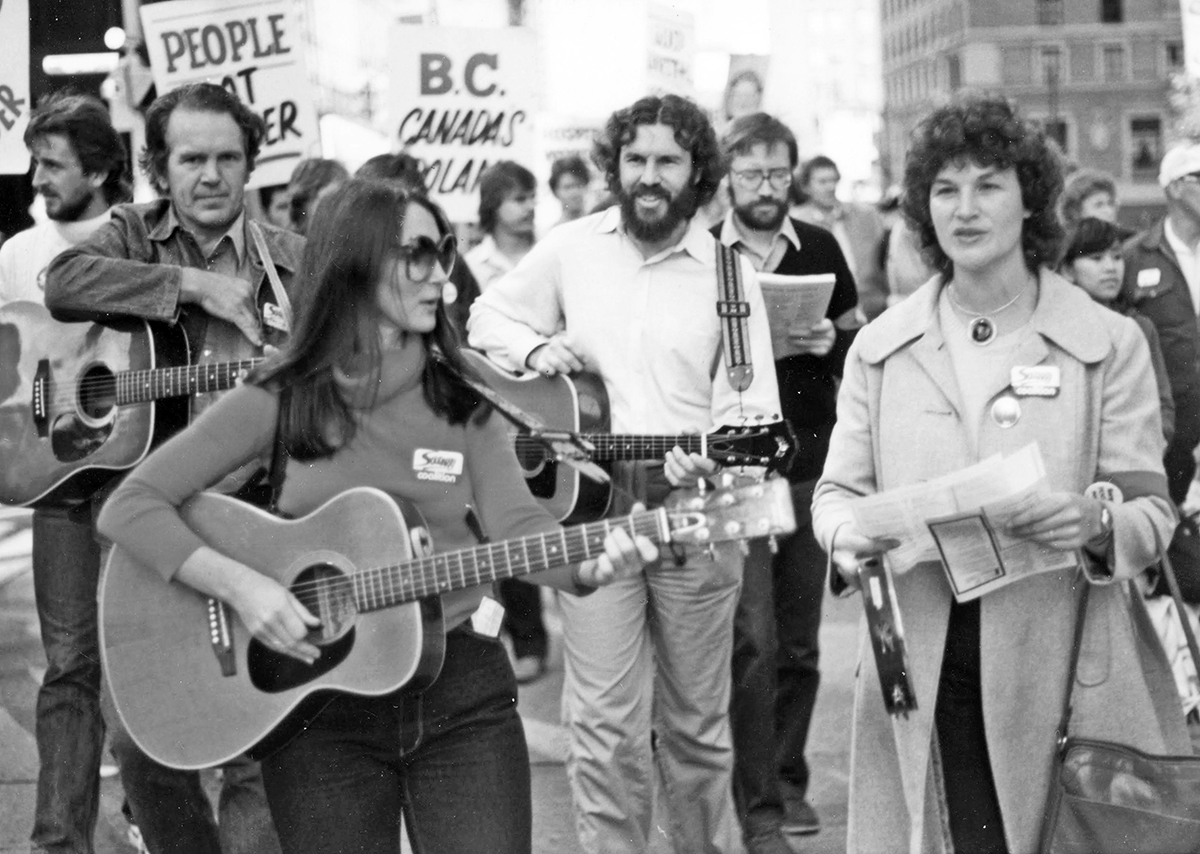 But at times, the book loses focus by drifting off into quirky tangents such as socialist history going back to the First International, tales of old lefties, endearing though they are, musical memories from Vancouver’s past and tales of Barkerville and Wells. There are also errors. It was the Fraser River gold rush that prompted establishment of the Colony of British Columbia in 1858, not the 1860s gold rush at Barkerville. There are others, none fatal. 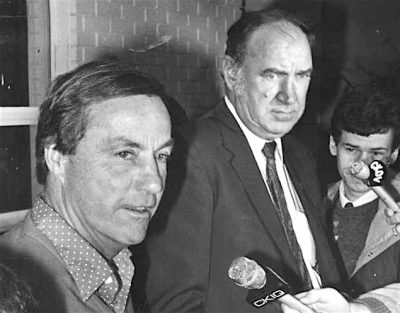 In the end, it mostly came to nought. With 70,000 public sector workers already on the picket line, ferry workers and bus drivers were due to walk out the following Monday morning. By then, however, the government had backed down on its anti-union bills and Operation Solidarity leaders wanted out. With Kube sidelined by pneumonia, International Woodworkers of America (IWA) leader, Jack Munro flew to Kelowna to negotiate a deal with Premier Bill Bennett. Solidarity’s Coalition partners were frozen out. It was now a union show. Late Sunday night, November 13, as the province held its breath, Munro and Bennett announced the strike was over. The so-called Kelowna Accord contained nothing that addressed social issues.

Left in the dark back in Vancouver, members of the Coalition, many of whom had put their personal lives on hold for months, were devastated. Spaner gives them justifiable voice. “We were all in tears,” recounts tireless social justice advocate Patsy George. “It was a horrible betrayal.” Self-styled “hoarder of records” Sara Diamond was so upset she threw out all her records from Solidarity and the Coalition.

Despite the ennobling harmony of the summer, the gap between unions and social groups proved too wide to be bridged. Spaner puts all the blame on the labour side, disparaging what he calls “obsolete unionism.” It’s an odd term for what was the most militant labour movement in Canada, reflecting an imperfect understanding of how unions work. The Coalition’s vote for a general strike to be carried out by unions, not Coalition members, irritated many in the private sector.

Munro, who unleashed a barrage of disparaging remarks of his own about members of the Coalition, takes his lumps, including withering criticism from then BC Teachers’ Federation president Larry Kuehn, one of Solidarity’s heroes for leading 30,000 teachers out on an illegal strike, as the first wave of Solidarity’s general strike.

Despite its faults, we should be grateful that David Spaner has given us this account. His book reminds us that there was a time when British Columbians united in common resolve to stand up for justice and human rights, and anything, even the political surrender of a government, seemed possible. Spaner is right to conclude: “The Solidarity uprising of 1983 gave us a glimpse of what could be. [It] was far greater than its anticlimactic ending.”

Such a time it was. 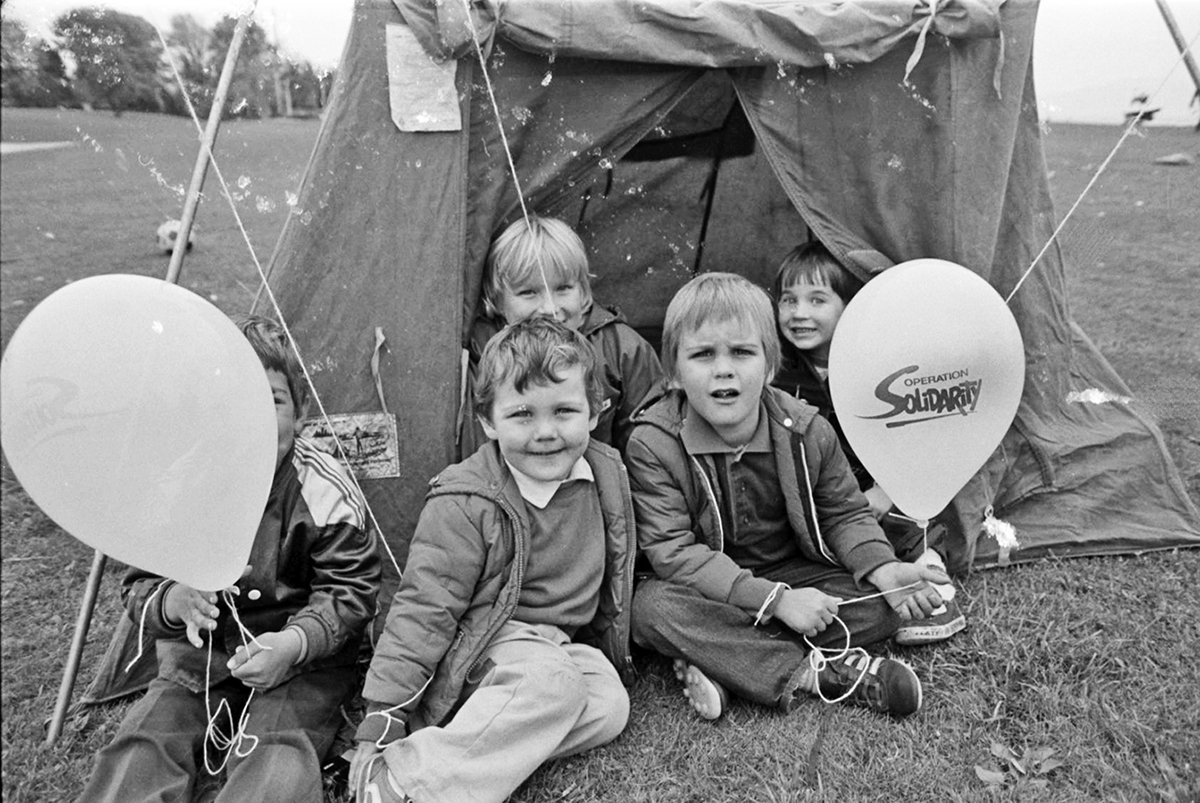 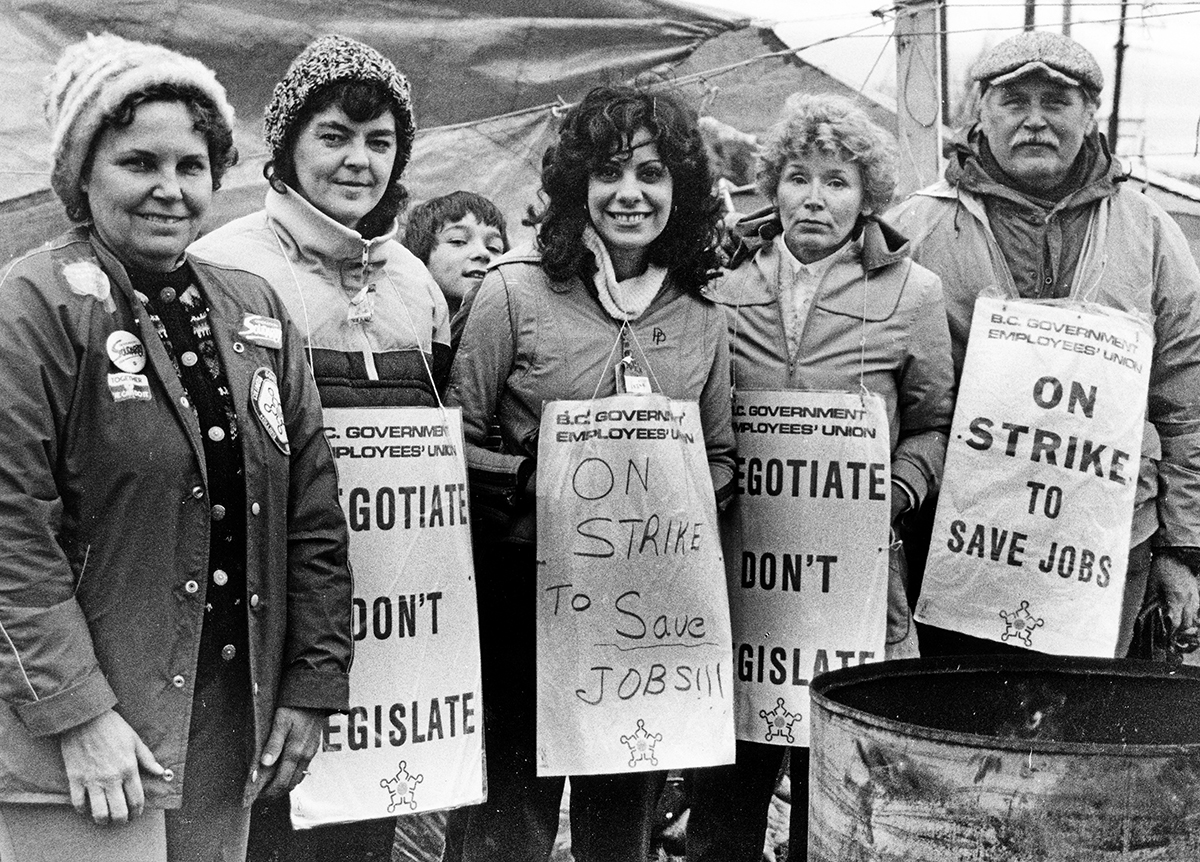 Rod Mickleburgh co-authored with Geoff Meggs, The Art of the Impossible: Dave Barrett & the NDP in Power, 1972-1975 (Harbour). It won the Hubert Evans Prize in 2013.