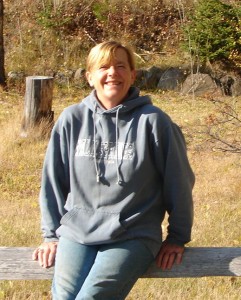 As a former RCMP homicide investigator, Ruth Donald’s protagonist Hunter Rayne travels far afield, driving a rig for a B.C.-based company, often aided by a sidekick she describes as “a garrulous biker with problems in impulse control.” Rayne’s boss and dispatcher, Elspeth Watson, is a no-nonsense gal who has earned her nickname Big Mother Trucker. Each novel is named for the locale of the highway on which the hero travels. For instance, much of her second novel, Ice on the Grapevine, is set in and around Los Angeles; her fourth release, Sundown on Top of the World, is set in the Yukon and Alaska.

R.E. (Ruth) Donald was born in Winnipeg in 1950 (during what used to be called the great flood). Her family moved to BC in 1958 and she grew up in West Vancouver where she attended Hillside Secondary School (her last name at the time was Hunter), then she studied languages (Russian, French, German) and Creative Writing at UBC in the ‘70s (when her last name was Biga), and International Marketing at BCIT in the ‘80s (when her last name was Hastings). She worked in the transportation industry in various capacities from 1972 until 2001, for both air freight and trucking companies. She handled Accounts Payable at Pharmasave Pacific regional office from 2001-2008, and was the Recreation Coordinator for the Horse Council of BC from 2009-2012.

R.E. Donald currently lives on a ranch in the South Cariboo region of B.C., where she and her partner, Gilbert Roy, enjoy their Canadian Horses (Le Cheval Canadien), Canada’s own heritage breed, and other animals.

One Response to “Git your motor running”