One good fjord deserve another 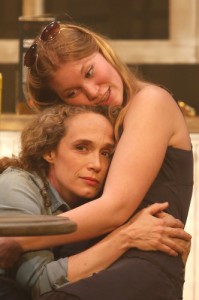 Indian Arm
by Hiro Kanagawa
based on Little Eyolf by Henrik Ibsen
Rumble Theatre
Studio 16
April 8-18
It’s hard to respond enthusiastically to a play that succeeds intermittently. But there is so much potential in Hiro Kanagawa’s Indian Arm that one wants to err on the side of supportiveness.

Whereas unctuous utterings about unceded Coast Salish territory at the outset of public events usually serve only to make those cell phone warnings welcome by comparison, for once liberal guilt masquerading as a veiled admonition is germane to the subject matter.

Most people in Vancouver don’t have a clue where Indian Arm is. The program provides a map. It’s an 18-kilometre fjord past the Burrard Indian Reserve (where Chief Dan George is buried), past Dollarton (where Malcolm Lowry lived in his squatter’s shack), past Belcarra and Deep Cove (where the Tsleil-Waututh [Sly-wah-tuth] First Nations have long dwelt), where once there was a remote, luxury resort, the Wigwam Inn, now privately owned by the Royal Vancouver Yacht Club.

All the action of this play—loosely based on a 1894 play by Norwegian Henrik Ibsen called Little Eyolf, also set on a fjord—occurs at a remote, Indian Arm homestead on Coast Salish reserve land, long occupied by a white family. The original white settler, who is nicknamed Eric the Red for some faux Nordic reason that is never made clear, has died; his daughter Rita still lives there.

Rita is estranged from her Governor General’s Award-winning-now-failing novelist husband, Alfred. He successfully fancied himself as the next incarnation of Malcolm Lowry until his self-indulgence sickened him. Alfred has returned to the Indian Arm homestead to help Rita [nothing to do with The Ecstasy of Rita Joe] care for their adopted First Nation son, Wolfgang. He has severe mental health handicaps due to some birth defects—perhaps fetal alcohol syndrome—or so we are led to believe.

Highly temperamental in his early teens, Wolfgang is nicknamed Wolfie. It just so happens that the Tsleil-Waututh First Nation are also known as Children of the Wolf. Socially awkward, subject to low self-esteem, Wolfie increasingly wants to identify with his indigenous heritage. Alfred has enrolled him in some Aboriginal camp, unbeknownst to his mother. As recorded by Pauline Johnson in her Legends of Vancouver [a book she wanted to have entitled Legends of the Capilanos to acknowledge the stories were given to her by Joe and Mary Capilano who also lived on the North Shore], there was once a myth about a lost island, a secret place that would afford relief and redemption for the original inhabitants of Vancouver harbour.

Wolfie becomes fixated on this myth. The uber-male Erik the Red once hacked a trail into the wilderness; Wolfie wants to find the trail… the trail to the Lost Island… Such mystical First Nation claptrap in Indian Arm is barely above the level of the happy hunting ground. The opening and closing sequences of this play are dreadful, and can be jettisoned. We will try to avoid mentioning the quality of the acting in these scenes…

Indian Arm kicks into gear with the arrival of Rita’s effervescent and alluring younger sister, Asta. She’s about fifteen years young than Rita so it takes a while for us to unravel the nature of their combative and yet caring relationship. It slowly becomes clear they are half-sisters. Rita is self-conscious about losing her looks, she’s jealous of Asta’s youthfulness. [PHOTO AT TOP RIGHT, Jennifer Copping as Rita and Caitlin McFarlane as Asta]

Here playwright Hiro Kanagawa—who teaches playwriting at Capilano University and is married to a woman with Coast Salish heritage—is at his best. Asta happily tells Rita how she cheekily inveigled a ride to Indian Arm on a yacht because there is a “jumper” on the Ironworkers’ Bridge to North Van and the road is closed. Girltalk leads Asta to reveal that young construction workers were recently attracted to her in a café and one of them has given her his phone number—and she has kept it.

Asta is a bit ditzy but she’s genuinely fond of Wolfie. Alfred arrives and we soon witness tension in a failing marriage. Frustrated, Rita demands both tenderness and sex. There’s a memorable scene in which she challenges Alfred to do it on the kitchen counter. Or else the back seat of the car.

We start to care about these people as flawed people even if some of the acting is over-wrought and some dialogue is euphemistically sung rather than said.

After rushing through some of her lines at the outset, newcomer Caitlin McFarlane shines as the most consistently natural performer on the stage—but then she is carrying the least baggage in terms of emotional turmoil.

First Nation actor Gloria May Eshkibok—an impressive presence as an unwanted Coast Salish visitor named Janice who was once rescued from the horrific residential school by Eric the Red—also has many strong moments in this production when she can remember her lines.

Rita is not only losing her cool with Wolfie, jealous of Asta and furious with her husband; she is stricken by the fear that she could soon be homeless. Therefore her biggest problem is Janice. Wise and not averse to acting superior, Janice has let Rita know her tenancy on First Nations land could soon be terminated.

Rita is aghast, even apoplectic. How dare they give her the boot!!! Her father was given permission to build the house. Her father was beloved as a saviour of the poor, pathetic Indians.

This is where Indian Arm gets really interesting. In the same way that First Nations have been reduced to ridiculously pleading in court that they really existed, that they really had homelands before the white man showed up; Rita is humiliated and appalled by the notion that she will have to prove her right to live where she grew up. Her desperate trump card will be to use her adopted child Wolfie to prove her legitimacy. Finally her brain-addled, charity-case-of-a-son can be beneficial to her.

It gets uglier. We won’t reveal the fate of Wolfie. We won’t tell you the fate of the young ‘jumper’ on the bridge and his relation to Janice. And we’ll be hush-hush about the outcome of the soured marriage. But we can tell you that Kanagawa has done a fine job building the tension by the end of the first act.

How much of this drama-building is Ibsen, and how much of it is Kanagawa, is a mystery unless one wants to dredge up a copy of Little Eyolf. It doesn’t really matter, just as long as we are curious about the fate of these five people. Better still, we’re not even sure who we are pulling for, or why. We are mutually perplexed by their predicaments.

It’s a pity the second act is such a disappointing melange of analytical, nasty shouting and contorted, floor crawling angst. The makeshift homestead set is dismantled and we are left to ponder boundary-less ranting and dissertations among the faux-forest poles as characters dissect their predicaments and challenges, verbalizing lots of stuff we have already gleaned from the first act.

It’s like Kanagawa suddenly decided he should try writing like Tennessee Williams. Kanagawa has given poor Rita so much bleating in the first act that she has nowhere to go in Act Two except berserkdom. Watching Alfred in full-tilt agony is no picnic either.  There are two major reveals in the second act—both of which could be shockers—but these are buried in the avalanche of harsh talk and histrionics.