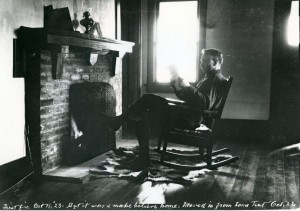 Two houses donated by author Hamilton Mack Laing (above) are slated for demolition.

It happens more than you think. A person or a group makes a donation to the public to preserve a facility in perpetuity, and–whoosh–time passes, promises aren’t kept. Joy Kogawa and her childhood home in Marpole, southern Vancouver

Joy Kogawa House in Vancouver is now in jeopardy. After many people assumed it was safely held within the The Land Conservancy of B.C., the facility to honour novelist Joy Kogawa is facing foreclosure on July 18.

TLC became the owner of the house at 1450 West 64th on May 31, 2006 following fundraising effots made by members of the The Historic Joy Kogawa House Society and others. TLC has acknowledged its mismanagement, declaring it can no longer sustain 51 sites around the province that also include Abkhazi Garden in Victoria, Madrona Farm in Saanich and Talking Mountain Ranch at Clinton.

The purchase of the house for preservation purposes had been made possible because of a $500,000 donation from Senator Nancy Ruth.

In response to the news that her family’s former home would be preserved, Joy Kogawa wrote in 2006: “What the house means to me — these days it’s a sense of miracle that surrounds me. The fact of The Land Conservancy coming along and taking this on, the fact that it just happened to be that Naomi’s Road was made into an opera at this time, that Vancouver Public Library chose Obasan as the One Book for Vancouver–these were miracles enough, without it all happening at this particular time. And the amazing miracle of the particular people who were drawn to the work of saving the house — Anton Wagner, Ann-Marie Metten, Todd Wong. So the house and the cherry tree and all these happenings and people are signs of miracles and fill me with hope. When we look at the uncaring in our planet, here is evidence that relationships can be rehabilitated, the formerly despised can be embraced. The dream that writers who are presently among the despised of the world, can come and write their stories here, fills me with even more hope. Racism is a present tragedy in the world, as it has been in the past. Here is one small way that we can say in Canada, that racism can be overcome.”

Now local politicians in Comox are taking the heat for voting to destroy two houses on waterfront property donated to the area by venerable pioneer Hamilton Mack Laing (1883-1982), also a B.C. author. The properties are in Mack Laing Nature Park at 70 Orchard Park Drive.

In June of 2014, the Comox Valley Naturalists Society and Project Watershed requested that Comox Council delay their demolition. A subsequent report provided by various experts determined that one house, called ‘Shakesides,’ was structurally unsound and could not be salvaged for long-term use, but Laing’s house called ‘Baybrook’ was structurally sound, according to a professional engineer, and it was salvageable, according to a professional architect.

In March of 2015, historian Richard Mackie, who wrote a biography of Laing, wrote a scathing letter to express his exasperation and regret upon learning that the Comox City Council was still planning to demolish the two homes on the nature preserve, both built by Laing.

With regret I have cancelled the generous offer by Evelyn Gillespie to participate in the “Authors for Independent Bookstores” day at the Laughing Oyster Bookstore on Saturday 2 May 2015.

Anyone familiar with my four Comox Valley books will appreciate my love of the history and heritage of the valley: Hamilton Mack Laing: Hunter-Naturalist (1985), The Wilderness Profound (1995), Island Timber (2000) and Mountain Timber (2009), all of them published by Sono Nis Press. I simply cannot believe that Mack Laing’s two houses in Comox are to be demolished despite the honest and unselfish efforts of the Mack Laing Society to preserve them. Any house can be preserved if the will exists to do so, and excuses can always be found for demolition. Dedication and effort are always required to preserve our cultural heritage.

In the last decade I have seen a good many Comox Valley landmarks destroyed through civic neglect or arson, including the Courtenay Hotel, the Lorne Hotel, Leung’s store, Palace (Bickle) Theatre, the Currie (Radford) farmhouse on Balmoral Road, and now Mack Laing’s two houses. All these buildings were of provincial and arguably national importance.

With the loss of the Lorne and Courtenay hotels, the nineteenth century has been expunged from the Comox Valley. This destruction amounts to cultural vandalism.

Why should I celebrate books, history, and heritage with a community that consistently destroys what I have tried to protect and perpetuate?

Hamilton Mack Laing (1883-1982) was a naturalist and artist who came to the Comox area in 1922. He wrote 24 scientific articles on ornithology, almost 700 natural history articles for newspapers and magazine, and several books related to nature and fishing.

Born in Ontario and raised on a Manitoba farm, Hamilton Mack Laing attended art school in New York. After a stint as a school principal in the American west, where he travelled extensively on a motorcycle, he built two homes near the waterfront in Comox on acreage that he donated to the community. Shakesides is one of the Laing houses to be torn down in Mack Laing Nature Park, Comox

His property became a park named in his honour. Also a photographer, he collected specimens for the National Museum, wrote for many outdoor magazines and operated a nut farm. He befriended fellow ornithologists, including P.A. Taverner and Allan Brooks, and wrote a book about the latter. Laing is the subject of a biography by Richard Mackie, Hamilton Mack Laing: Hunter-Naturalist (Sono Nis 1985), a finalist for the 1985 Lieutenant Governor’s Medal for Historical Writing. It was published three years after Laing died at age 99.

There are precious few designated literary sites in B.C. Last year the The George Ryga Society very reluctantly opted to disband and sell the house in which George Ryga wrote The Ecstasy of Rita Joe and his other books. Although the buyer does value the literary heritage of the house, the ideal of preserving the site in perpetuity for social functions is seemingly kaput. 3 Responses to “Comox looks gift houses in the mouth”