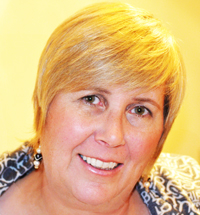 Prior to her teaching career, Gina McMurchy-Barber majored in archaeology at Simon Fraser University and studied orangutans in Borneo with Dr. Biruté Galdikas. She has also led backpacking tours in Asia and South America.

Raised by loving parents with an older sister who had Down syndrome, Gina McMurchy-Barber was rightfully recognized with a nomination for a Governor General’s Award in children’s literature when she wrote her remarkable novel, Free as a Bird (Dundurn 2010).

This moving, first-person memoir by a fictional character, Ruby Jean Sharp, recounts how Ruby “growed up in Woodloods” with Down syndrome after her mother had taken her there one day—and never came back.

It’s not just a memorable story; it serves as a literary monument to the sorry history of Woodlands itself. McMurchy-Barber will be one of 150 B.C. authors to be honoured with a location on the Literary Map of B.C. when it goes public in March.

For a lengthy summary of Free as a Bird and its significance, you can visit:

Free as a Bird is only one of six titles from the Surrey author since 2008.

Gina McMurchy-Barber has also received the 2004 Governor General’s Award for Excellence in Teaching Canadian History. Her archaeology adventure series begins with Reading the Bones (Dundurn 2008) in which 12-year-old Peggy Henderson discovers a human skull while helping her uncle dig a pond in his Crescent Beach backyard. As being away from her parents makes her increasingly unhappy, she becomes increasingly attracted to the mysterious awareness that she is living atop the site of a 5000-year-old Coast Salish fishing village. An elderly female archaeologist named Eddy helps her to “read the bones” of an ancient storyteller buried in the yard. It’s the first in a series of Peggy Henderson adventures.

In the next three archaeology adventure books —Broken Bones (2011), Bone Deep (2014) and A Bone to Pick (Dundurn 2015)– Peggy continues learning about the past through archaeological discoveries with her friend Dr. Eddy McKay.

Broken Bones is a wild west story, complete with a hanging. With the help of the local museum Peggy learns to incorporate historical information with the unknown remains of an executed prisoner from the time of the expansion of the railroad across Canada.

With Bone Deep Peggy enters the world of underwater archaeology and learns the thrills and dangers of excavating a 200-year-old Pacific fur trading ship.

In the most recent book in the series, A Bone to Pick, Peggy visits the former Viking settlement at L’Anse aux Meadows National Park in Newfoundland where she accidentally discovers a Viking burial cairn. But Peggy’s know-it-all attitude threatens to get her banned from the excavation.

When Children Play is Gina’s first non-fiction book. It covers the importance of play in all children’s lives, but in particular those most disadvantaged children of the world whose lives have been altered because of war, disease, famine and more. It’s the story of Right To Play—an international organization that is bringing play back into the lives of children in Africa, South America and Asia.