Gabriola gets a prize winner 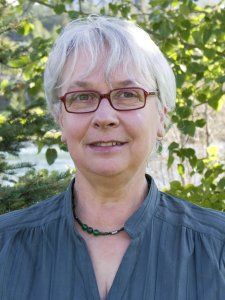 Claire Eamer has lived in Whitehorse, Ottawa, Winnipeg, Edmonton, and parts of Germany and England, prior to moving to Gabriola Island. Her The World in Your Lunch Box: The Wacky History and Weird Science of Everyday Foods (Annick 2013) won 2013/2014 Red Cedar Award for best non-fiction book according to voting from B.C. students. With eight true stories of scientists and inventors who all went ‘outside of the box’ to make major contributions to mankind, Before the World Was Ready: Stories of Daring Genius in Science (Annick Press 2013) by Claire Eamer previously won the 2013 Lane Anderson Award for best science book for children in Canada. The latter recalls why Alfred Wegener struggled to convince geologists that the ground beneath our feet is moving, why “mad scientist” Nikola Tesla’s futuristic ideas about electricity were dismissed, why Charles Darwin delayed publishing his controversial theory of evolution for decades, and how Charles Babbage and Ada Lovelace nearly invented the first computer in the 1800s. She also writes about Copernicus and the sun-centred model of the universe; Ignaz Semmelweis, who tried in vain to persuade doctors to use disinfection methods; the aviation pioneer George Cayley, whose ideas were decades ahead of the technology that would make them work; and Rachel Carson, who sounded the first alarm about the effects of pesticides on wildlife. Her other titles include Lizards in the Sky: Animals Where You Least Expect Them, Spiked Scorpions & Walking Whales: Modern Animals, Ancient Animals, and Water, Super Crocs & Monster Wings: Modern Animals’ Ancient Past and Traitors’ Gate, and Other Doorways to the Past. [Tim Kinvig photo]