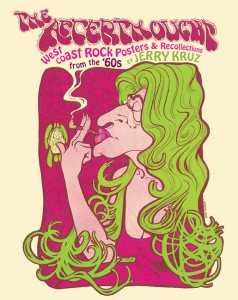 From 1965 onward, The Afterthought was the name of a music promotion enterprise that surfaced for rock and psychedelic music groups at various Vancouver venues including St. John’s Church Hall, 27th & Granville, the Scottish Auditorium, the historic Pender Auditorium (339 West Pender), the Bunkhouse, the Gazebo at First Beach and Kitsilano  at the so-called Kitsilano Theatre (2114 West Fourth). Jerry Kruz was the ongoing music promoter and entrepreneur for The Afterthought. Over the course of dozens of concerts spanning several decades, Kruz collected posters for the various gigs, many of which he had commissioned from artists Doug Cuthbert, Bruce Dowad, Bob Masse and the late Frank Lewis. He has now published his collection of posters, along with his personal reflections of events, for a history of the counter-culture music scene on the West Coast. His memoir and art book, The Afterthought (RMB $40), not only recalls the glory days of music groups such as the Grateful Dead, Janis Joplin, Steve Miller, The Collectors (Chilliwack) and Country Joe & the Fish. It provides a chronological record of performances by Vancouver-based bands such as The Nocturnals, United Empire Loyalists, Tom Northcott Trio, Rocket Norton, the Black Snake Blues Band, Seeds of Time and others. The full title is The Afterthought: West Coast Rock Posters and Recollections from the ‘60s. The compendium came to fruition after 15-year-old Grace Gorman of Victoria started collecting and purchasing copies of old rock concert posters. Her father happened to be Don Gorman, a publisher. The curiosity of his daughter prompted Gorman to eventually connect with Kruz. Of all the concerts he attended, Kruz cites a gig at the Pender Auditorium on August 5, 1966 featuring Grateful Dead, supported by United Empire Loyalists, as the best ever. He recalls the Grateful Dead’s soundman and manager Owsley “Bear” Stanley “walking through the room dispensing acid to anyone who opens their mouth” as soon as Grateful Dead hit the stage. “This of course results in a high energy crowd.” 9781771600248

According to publicity materials: “Jerry Kruz was born in Winnipeg, Manitoba, in 1948 and moved with his family to the east end of Vancouver, British Columbia, when he was still a toddler. Eventually the family ended up in the not yet trendy Vancouver neighbourhood of Kitsilano, where Jerry’s Catholic parents envisioned he would spend his early years preparing to enter the priesthood. By the fifth grade, however, he had lost all interest in school. After years of verbal and physical abuse, he believed he could do better on his own and started working in his father’s print shop at the age of ten. At sixteen he had quit going to school and was working various jobs, including delivering fish and chips, assisting at a meat market, assembling bicycles and delivering telegrams. When the opportunity came along to run a Christmas tree stand with his best friend, he jumped at the opportunity. It was then that Kruz discovered he could successfully operate his own business. Eventually he was given the chance to manage one of Vancouver’s many coffeehouses and from there he grew to become one of western Canada’s youngest and most successful music promoters, eventually giving rise to one of the first psychedelic dance halls in North America, The Afterthought. Jerry and his wife, Julie, live in Victoria, British Columbia.”