From Rita Joe to Children of God 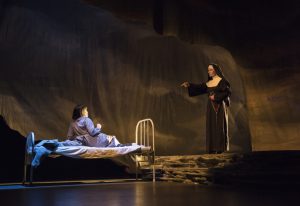 A musical by Corey Payette

Forget about softwood lumber. We have a renewable West Coast resource we can export called Children of God. It’s a serious musical with the potential to merit attention beyond our borders. If a musical about Gander can make it to Broadway, so can we.

The world premiere of Children of God was far from perfect, but with further refinements, if there was an Olympics for theatre, we could be in medal contention. Opening night jitters jeopardized some of the early choral work, but overall this is an intelligent play about residential schools in which we are not being constantly told that all indigenous people are completely good and all people who worked in residential schools must have been completely evil.

Best of all, this play simultaneously reveals how the inescapable residue of abuse, loneliness and captivity within residential schools has been ruinous for adult survivors. The lead male role of Tom/Tommy (Herbie Barnes) continually switches between Tommy’s incarceration and humiliation as a frightened, bullied child and Tom’s humiliation and frustration as an unemployable, volatile man.

Throughout this play I couldn’t stop thinking about the recent death of Richard Wagamese, the Kamloops author who consistently blamed much of his alcoholic turmoil on residential schools—even though he’d never attended one. Having been raised in fifteen foster homes, Wagamese maintained that his parents’ lives had been destroyed by residential schools and so his own miseries were largely inescapable. This play made me want to believe that his claim could be 100% true—not just 50% or 75%.

B.C. leads the country, by far, in terms of literature about, for and by indigenous Canadians. We’ve got the Nisga’a Agreement and Wagamese was one of more than 200 B.C. indigenous authors. There are literally thousands of books published from B.C. about First Nations since the early 1970s. Ever since James Teit accompanied a delegation of B.C. Indian chiefs to seek redress in Ottawa in 1916, we have been ahead of the curve. Edward Sapir’s photo of the “Delegation of Indian Chiefs from Western Canada sent to Ottawa, 1916” shows John Tetlenitsa four months before his fruit was seized in Merritt and, further, that three Indigenous leaders of the land-and-rights agitations in the first years of the previous century lived in, or in the vicinity of, the Nicola Valley. Tetllenitsa is standing second from left, James Teit to his left. John Chelahitsa, a Syilx leader from Douglas Lake country, is seated immediately below Tetlenitsa.

One hundred years later, Ontario is catching up. Ottawa has sanctioned the Truth and Reconciliation Commission and the inquiry into missing indigenous women and girls. Now federal monies have enabled Children of God to evolve beyond another doomed, well-intentioned, workshopped and then hastily produced show.

Not long after The Ecstasy of Rita Joe by George Ryga premiered in 1967 at the Vancouver Playhouse—starring Frances Hyland as Rita Joe, Chief Dan George as her father, Ann Mortifee as the singer, Robert Clothier as the priest and August Schellenberg as Jaimie Paul—it became the first play in English to be presented in the National Arts Centre Theatre in Ottawa in 1969. It summoned forth the modern era of Canadian playwriting. The cast of Children of God. Photo by Emily Cooper. Production design by Marshall McMahen. Lighting design by Jeff Harrison.

Also connected to the National Arts Centre, Corey Payette’s musical has the potential to usher forth a new era of social consciousness in which Canadians finally come to accept that the annihilation and persecution of indigenous people amounts to our Holocaust (yes, we are fully aware of numerical differences). That is to say, in the same way that we do not tire of learning personal stories regarding the Holocaust, we must collectively learn to accept that stories about residential schools are here to stay.

The main hurdle for Children of God is asking the audience to get accustomed to seeing adults portraying children. This takes about twenty minutes. After that, the drama builds towards a crescendo of mutual understanding in which dignity triumphs over disdain. Common humanity dwarfs politics. Ultimately shared optimism for reconciliation feels genuine. The chanting sounds like music.

Particularly moving is the performance and singing of Cathy Elliott as Tom/Tommy’s mother. When a dreadful secret about her daughter is finally revealed to her by her son, she doesn’t shriek and wail, making a meal of it. Instead she takes the pain inside herself, disappearing like a wounded creature.

The pain of residential schools has been internalized in Canada. Children of God smartly exhibits that internalization process and its repercussions; then it lifts us beyond despair with a surprise ending that inspires a communal response. If that sounds vague, it’s meant to be. See it for yourself.

The Germans struggled for two generations to come to terms with the Holocaust. It takes lots and lots and lots of truth-telling to get the job done. The more particular the truths, the more we are fascinated. Although some of the characters could still be more nuanced in terms of personality traits, weirdly, this production succeeds in making us feel good about facing buried reality and shame.