Scrotal eclipse of the heart

We congratulate Billeh Nickerson on getting “what may be my only Publishers' Weekly review ever,” a rarity for a collection of Canadian poetry. 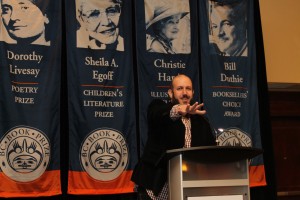 Billeh Nickerson presenting the Livesay Poetry Prize at the BC Book Prizes, 2014

It’s bizarre enough for the bible of American book publishing to notice a book of poems, rarer still for it to be from a press from Western Canada. But that’s what has happened with Billeh Nickerson’s latest.

According to Publishers Weekly: “The collection (Artificial Cherry from Arsenal Pulp) is presented in four sections, ranging from broad ones on the body and crushes, to the very specific ‘Pacific Northwest Elvis Festival’­ which is one long poem, an itemized inventory of quirks from the festival­ and “Shelagh Rogers Called Me a Slut and Other True Stories,” all poems reflecting on readings in various locations, each one ridiculous in its own way … Organizers Emiko Morita and Barbara Pulling report the fundraiser for Something Fierce author Carmen Aguirre on May 9th was a great success, drawing a crowd estimated at 100 and raising over $10,000. This total was then doubled when Mary & Howard White, owners of the newly constituted Douglas & McIntyre (2013) Ltd., stepped forward with an offer to match the total raised. Carmen was the biggest loser in the bankruptcy of the former D&M Publishers Inc., getting shorted some $60,000 when the flagship B.C. publisher went bankrupt in 2012.

Nice to see the writing and reading–and publishing–community rallying around one of its own. Aguirre is a veteran screen actor and successful playwright. She read an excerpt from a forthcoming novel about her life in Vancouver, likely to be published from Ontario.

For more on Carmen Aguirre, visit www.abcbookworld.com. For more on the mysterious demise of Douglas & McIntyre under chairman Scott McIntyre, you can’t look anywhere. There has been a paucity of critical reportage as to how Western Canada’s foremost publising house could run itself progressively over a cliff, owing creditors six million dollars.

Has The Tyee dropped its dedicated books section?

Close observers of the online newsmagazine have noticed the “books” button has recently been missing from the main menu. All book discussion now seems to be lumped in with movies and pop music under the “Culture” button. If this unheralded change is permanent, it represents one more defeat in the sorry story of book coverage by B.C. media, old and new.

Not only is it sad to see The Tyee, which is celebrating its 10th year of “swim(ming) upstream against the media trends of our day” following one of the most depressing media trends, it represents a rather dismal end to a project announced in June 2006 by the since-departed editor Charles Campbell in these enthusiastic terms: “it will occupy a distinct home page — www.tyeebooks.ca — with a unique look and sensibility, created by the immensely able Tyee web development and design director Dawn Buie and designer Alex Grunenfelder.”

Click www.tyeebooks.ca today and all you get is a temporary landing page routing you back to the home page. It leaves one wondering if  The Tyee lived up to the commitments it made to the provincial ArtsNow and Spirit of B.C. arts funding programs who put substantial money into the now abandoned book section, and to the Association of Book Publishers of B.C., who gave it their moral support.

One can only hope the self-styled “Chief” of B.C. news websites will continue to publish Crawford Killian’s intelligent and well-written book reviews, which were the mainstay of the Books page.