In 1936, Haig-Brown and his wife Ann Elmore moved to a house on the south bank of the Campbell River, just west of the town of that name, where they raised their daughters Valerie, Mary, and Celia, and son Alan. 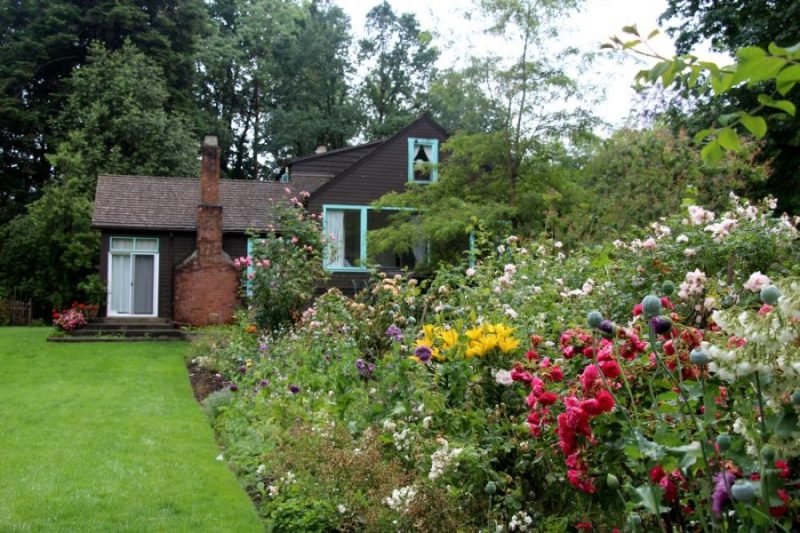 Here at “Above Tide” Roderick Haig-Brown wrote a children’s book, circa 1939, inspired by his two oldest daughters.

Haig-Brown emerged as an environmentalist during his fruitless attempt to stop the British Columbia Power Commission from building a dam on Buttle Lake in Strathcona Park in 1958.

Written soon after the family’s move to Campbell River, Alison’s Fishing Birds remained unpublished until 1980, when Vancouver’s Colophon Books published a limited edition of 500 hardcover copies of this children’s book.

It is now published here as an accessible trade paperback by Caitlin Press with an introduction by Valerie Haig-Brown, foreword by Andrew Nikiforuk, and illustrations by Sheryl McDougald and Jim Rimmer. — Ed 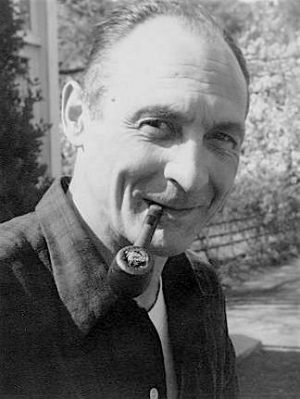 It was the familiar name — Roderick Haig-Brown — that drew me to Alison’s Fishing Birds.

His name had been mentioned often enough by other scientists and conservationists of my generation and older for me to appreciate his legacy as a writer with a solid and lasting reputation.

Therefore I appreciated the chance to review Alison’s Fishing Birds with its vivid and artfully rendered illustrations by Sheryl McDougald and contributions by Valerie Haig-Brown and Andrew Nikiforuk. 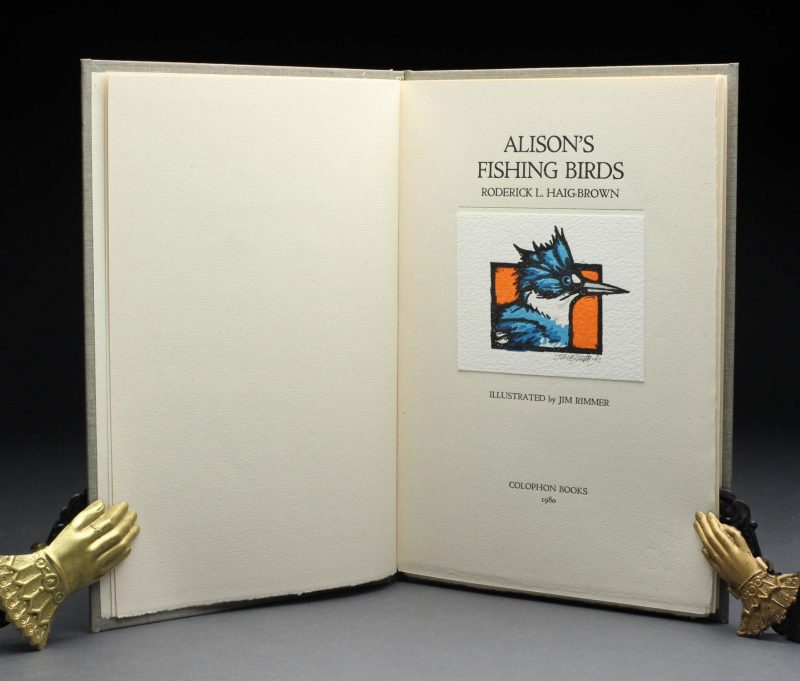 Clues discerned by Valerie date the book’s origin to 1939 or 1940. She would have been three or four at the time, her sister Mary two years younger, and it seems likely that Alison represents a composite of Haig-Brown’s oldest two daughters.

The book opens with “at least” two reasons why it is worth writing about Alison’s fishing birds. First, “Alison’s house beside the river … is in just the right place to see birds.” And second, “Alison is a quick little girl who likes to watch birds as well as anything.”

But don’t call Alison “a naturalist or bird watcher or anything dull like that!” Alison doesn’t “sneak and peer and creep” about in search of bird life. She just loves to watch birds by the river.

One of those fishing birds, a “Water-ouzel,” is a “very round and important and merry” bird that “more proper people than Alison and her father” know as a Dipper. 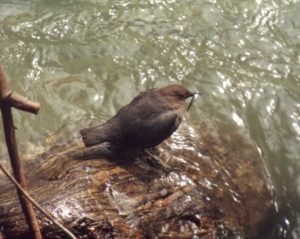 Haig-Brown here refers to the American Dipper’s extra eyelid, a nictitating membrane that allows it to see underwater. White feathers on its eyelids cause the eyes to flash white as the bird blinks.

It’s a description of an inconspicuous bird that many people, standing at the edge of a river, would barely notice, let alone describe in such simple yet exquisite language.

After the Dipper, Alison encounters the Kingfisher, who “laughed so loud” and was “handsome all over,” and the Heron, known as “old Walk-up-the-Creek.”

Then comes a chapter on Mergansers, which focuses on a secretive breeding pair who later emerge near the river with their round and fluffy ducklings. 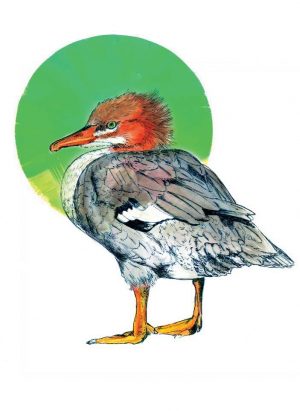 The book closes with a final chapter on the Osprey, a bird “too bold and free for Alison to feel that she was friendly with him.”

Alison’s Fishing Birds offers a chance to step back in time and a rare opportunity to sit near the Campbell River with Roderick Haig-Brown and his daughters. It’s a story that affirms the power of watching and the lengthy, often daylong, attentive pondering of birds and their environment, just for knowledge, fun, and a sense of fulfillment.

Each bird encountered offers subtle teachings, not just on nature, but on the relationships between humans and the natural world.

Alison’s Fishing Birds is as relevant for young people today as it was in the late 1930s for the Haig-Brown girls.

As Haig-Brown knew, the conservation ethos for most of us starts when we’re young. He knew that instilling an appreciation of natural history in future generations is crucially important for the persistence of wildlife species and the wild spaces they depend on. 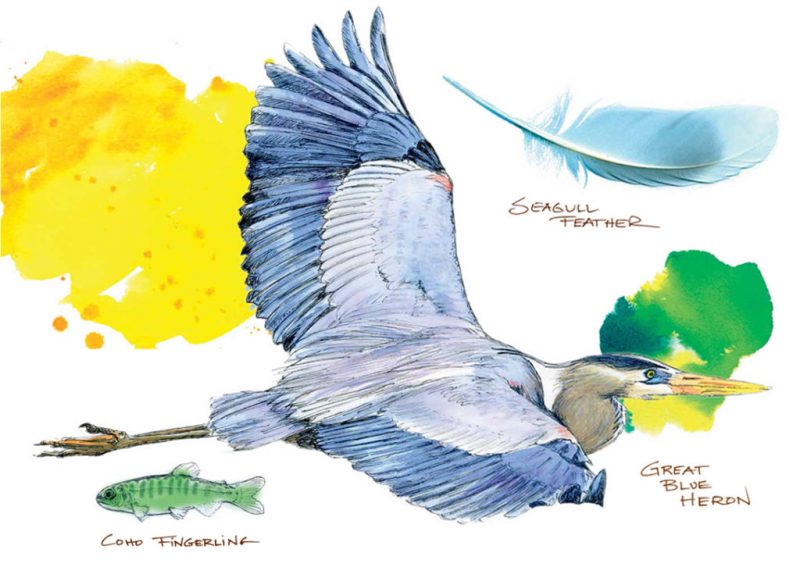 Perfect for bedtime stories or for reading on a window ledge overlooking a river, Alison’s Fishing Birds should pique children’s curiosity about birds and the natural world around them.

With a certain timelessness about it, this book can be enjoyed for generations to come. 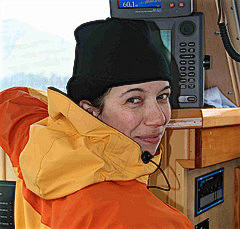 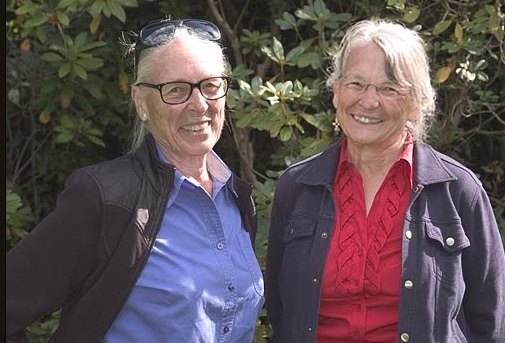 Valerie and Mary Haig-Brown were basis for the title character in Alison’s Fishing Birds.