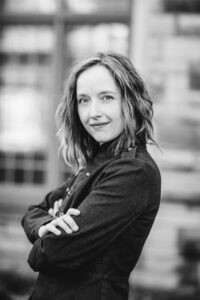 Victoria is an unhappily married woman who buries her melancholy in books and daydreaming in Robin Yeatman’s debut novel, Bookworm (Harper Perennial $21), a darkly humorous story of obsession and deeply- rooted fantasy life. One day, in Victoria’s favorite café, she notices a handsome man with the same book she is reading. She daydreams that this stranger must be her soul mate. Then, remembering she is married, Victoria’s mind retreats to darker places and ways of getting rid of “dreaded husband” for “café man.” It’s harmless fantasy until one night, fiction and reality blur. Will Victoria get what she’s wished for? Vancouver-based Robin Yeatman describes herself as a bookworm who learned to read at the age of three. She composed her first novel at the age of twelve and kept the writing habit. She took early drafts of Bookworm to the Iowa Summer Writing Festival before finishing it in her spare time. The novel will be released on Valentine’s Day, February 14, 2023. 9780063273009