Hunted nearly to extinction, sea otter populations are regaining their numbers on the West Coast. 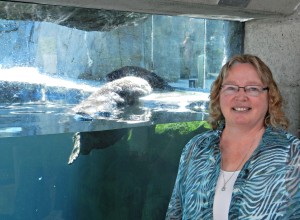 You know you’re stuck on a story when it stays in your head for three decades and it won’t let go. Such was the case for Karen Autio and her fourth book for children, Kah-Lan the Adventurous Sea Otter (Sono Nis $9.95).

After moving to Vancouver to attend Regent College in 1984, Autio and her husband Will soon bought aquarium passes. For hours at a time, she would park her lawn chair outside the sea otter enclosure, observing, wondering, and developing a story about two, almost-mature, wild sea otters getting swept away by a powerful ocean current.

The story persisted in her mind as she shifted her focus to raising her children and writing three historical novels. Over the years Autio kept fine-tuning the balance of her otter story between natural history and a quest story. “I was not only smitten with sea otters,” Autio says, “I was also fascinated by their survival skills in the Pacific Ocean.” While Autio’s admiration for otters shaped the plot, the manuscript was passed through a string of biologists to ensure naturalistic accuracy. Dripping with ecological facts yet without a whiff of didacticism, Kah-Lan the Adventurous Sea Otter weaves the natural environment into the myriad challenges that otters contend with—from orcas and riptides to food scarcity and fishing net entanglement.

Kah-Lan and his pal Yamka must contend with human encroachment, hide from orcas, dive for ever-scarcer food in their home kelp bed and avoid periodic grouchy cuffings from the Grand Otters living in their raft.

Reminiscent of the invented words in Richard Adams’s Watership Down, the language in Kah-Lan is nonetheless easy for young readers to discern without a glossary—although there is one provided.

“I played with language to express Kah-Lan’s perspective,” says Autio, “and to immerse the reader in his watery world. Kalan is a zoological term for sea otter and the spelling Kah-Lan helps readers know how to pronounce it.”

At the end of the book, readers will find several pages of information about sea otters, including their role in keeping our kelp forests healthy so that they, in turn, can support a diversity of sea life.

Engaging text, quick pacing and illustrations by Sheena Lott put the reader at eye level with the demands of life in our shallow coastal waters, while present-tense narration lends a sense of urgency to the otters’ experiences.

Targeted mainly for readers ages seven to twelve, Kah-Lan is a story with cross-generational appeal because it will lead to conversations about the health of our oceans, the necessity of maintaining biodiversity of the maritime environment and the importance of keystone species—such as the sea otter.

Having grown up in the Finnish section of Port Arthur (now Thunder Bay), Karen Autio received a silver spoon from her grandmother that made her curious about her grandmother’s Finnish friends and their links to Canada’s worst maritime disaster in peacetime–the sinking of the Empress of Island on May 29, 1914. Her first juvenile novel Second Watch (Sono Nis, 2005) placed an eleven-year-old heroine, Saara, on the doomed vessel as it departs in May of 1914, just one day prior to the loss of 1,012 passengers and crew from among the 1,477 people aboard. Fewer people died when the Titanic sank. In Autio’s second novel, Saara’s Passage (Sono Nis 2008), Saara, as one of the 465 survivors, returned to northwestern Ontario only to learn her beloved Aunt Marja must move to a sanatorium in Toronto for treatment of tuberculosis. Autio’s Finnish Canadian trilogy was completed with Sabotage (Sono Nis 2013) based on an attempt to blow up a Nipigon River railway bridge near Port Arthur during the First World War.