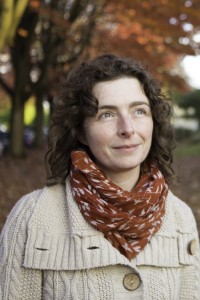 Bren Simmers’ book-length poem Hastings-Sunrise (Nightwood $18.95) has been shortlisted for the 2015 City of Vancouver Book Award. It is a tribute to the neighbourhood of Vancouver in which she lived from 2010-2013 and it reflects her attempts to find home in a city where she couldn’t afford to own one. Borrowing from phenology, she tracked seasonal and cultural changes from one spring to the next. “These observations allowed me to me to develop other markers of home,” she says, “the rhythms of street trees and Christmas lights, the people we pass everyday, and favourite neighbourhood routes.” She subsequently left Hastings-Sunrise in favour of the natural, wooded environment of the Squamish area. Bren Simmers has previously won an Arc Poetry Magazine Poem of the Year Award; she has been a finalist for The Malahat Review’s Long Poem Prize; and she has been twice longlisted for the CBC Poetry Prize. Her work has been anthologized in Alive at the Center: Contemporary Poems from the Pacific Northwest (Ooligan, 2013). Her first book was Night Gears (Hamilton: Wolsak and Wynn, 2010).

The 27th annual City of Vancouver Book Award will be presented at the Mayor’s Arts Awards ceremony at the Roundhouse Community Arts & Recreation Centre on November 12, 2015.
The books on this year’s shortlist cover a range of genres: non-fiction, short stories, poetry, and a children’s book. The other 2015 finalists are: Aaron Chapman for Live at the Commodore (Arsenal Pulp Press), an homage to the “Fabulous Commodore Ballroom,” a music venue which for 85 years has served as a cultural barometer for Vancouver.

Wayde Compton for The Outer Harbour (Arsenal Pulp Press), a creative manifesto for a radical change in Vancouver’s attitude to its marginalized citizens and land use to avert a crash-course with a dystopian, very-near future.
Lois Simmie and Cynthia Nugent for Mister Got To Go, Where are you? (Red Deer Press), a lovingly written and illustrated Vancouver-based children’s book featuring an impromptu journey by the iconic cat from the Sylvia Hotel.
The four shortlisted titles were chosen by an independent jury that included: Anna Ling Kaye, editor of Ricepaper Magazine and 2015 Journey Prize Anthology author; Zoey Leigh Peterson, novelist and librarian; and Sirish Rao, Artistic Director & Co-Founder of the Indian Summer Festival.