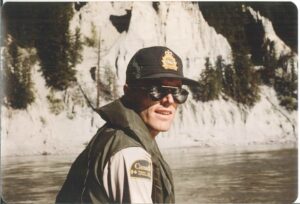 When Randy Nelson retired in 2012 as the most decorated fisheries officer in the history of BC, he began collecting poaching stories. Like the one about the ex-RCMP officer who made millions of dollars selling illegal narwal tusks until he was caught, fined and did jail time in the US. Nelson’s nickname for him was ‘Lowlife’. “I don’t much care for poachers,” Nelson says. “But a few changed and I liked them after that.” He gathered almost a hundred stories about poachers in both Canada and the US for The Wildest Hunt: True Stories of Game Wardens and Poachers (Harbour Publishing $24.95). Nelson’s first book was the memoir, Poachers, Polluters and Politics: A Fishery Officer’s Career (Harbour 2014). 9781550179989