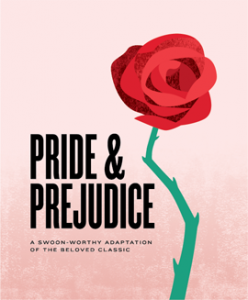 Pride & Prejudice is a story in which honesty must triumph over falseness in order for love to prevail.

Truthfulness is at the heart of the matter, including one’s ability to overcome one’s own pride and prejudices.

This version has been advertised as swoonworthy when it is only seaworthy—suitable for cruise ships.

Naomi Wright as the heroine makes for a plausible, articulate and admirable Elizabeth Bennet, even-tempered almost to her detriment when it comes to matrimonial gameswomanship, but likeable due to her concern for others. Bordering on plain and plainspoken and yet attractive by virtue of her dignity, Wright injects realism in a production that too frequently veers towards caricature.

In her cameo as the sternly reprehensible Lady Catherine, Shirley Broderick has all the imperious power of a Maggie Smith (as Violet Crawley in Downton Abbey). Her menacingly confident and thoroughly engaging countenance even succeeds in being mesmerizing from the inside of a carriage.

Scott Bellis delights as a mincing, reedy-voiced clergyman and would-be suitor, Mr. Collins. He’s in another league entirely, so much so that half of his fellow cast members appear to have been transported from the Metro Theatre by comparison.

Doubling as the housekeeper, Mrs. Reynolds, Bellis’ cost-saving, cross-dressing performance is good for a chuckle, but it emphasizes the extent to which this production directed by Sara Rodgers is awash in artificiality. Eliza & Darcy at the Stanley Theatre

Darcy is described by Austen as a man who galvanizes attention as a “fine, tall person, handsome features, noble mien.” Three out of four adjectives doesn’t cut it. Just because Darcy “does not rattle on like other men,” his reserve does not automatically make him intriguing. Craig’s Darcy is devoid of a brooding presence and hidden depths, so much so that our star-crossed couple’s prolonged kiss at the end, like the conclusion to a Fifties’ movie, fails to be convincing for even a second.

It takes more than simply having a man take off his shirt on stage to convince us that he has a manly presence. During that bizarrely gratuitous (and non-Jane Austen-like) glimpse of chest hair, we are simultaneously shown five sisters in nightgowns taking turns in a bathtub that has no water in it.

Overly simplistic choreography for a dance scene only succeeds in affording the pretense of dance. Similarly, sidelong musical accompaniment by Daniel Deorksen and Sarah Donald is passionless, uncomplicated, repetitive and ultimately intrusive during the kiss.

Deorksen and Donald save the Arts Club more money by doubling as Mr. and Mrs. Gardiner because they are clearly not the right age for those parts. Again, falseness has been deemed acceptable in a play about truth.

David Marr, as Eliza’s father, has many of the best lines in the play but he phones this one in. Comedy is not enough. We have to believe that Eliza got her gumption from somewhere, from someone—and that has to be her father. Give us a complex personality, not a country bumpkin.

Presenting pallid representations of landscape art in the style of John Constable has zero impact and there is precious little furniture on the stage so that more inexperienced members of the cast are rootless, without credible actions—at sea. Watching actors make the set changes doesn’t help either.

Eliza’s three younger sisters Lydia, Mary and Kitty are depicted as jejune to an extreme, evidently directed to appear stupid. We don’t know whether these younger women were given simplistic direction because they are novices or not, but either way these supporting players are painful to watch.

By contrast, Kaitlin Williams as the older sister doesn’t oversell her role and gives us someone on stage to like. Her scenes with Naomi Wright are particularly pleasing. It’s one of the few relationships on stage that are credible.

This production is devoid of dramatic tension. It is mere product.

As The Arts Club expands with more clout, more productions, garnering a bigger share of the publicity pie, sharing new offices and a new venue with its rival theatre operation, Bard on the Beach, that duopoly ought to engender higher standards, not lower. I left Pride & Prejudice recalling The Playhouse with nostalgic fondness.