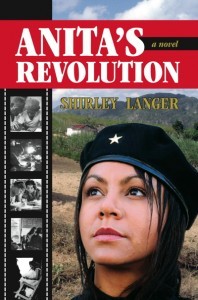 Having lived and worked in Cuba for five years in the mid 1960s, Shirley Langer has a deep and abiding knowledge of Cuba that resulted in a marvelous young adult novel, Anita’s Revolution (Shirleez Books $15.95), recalling Castro’s literacy campaign of the early 1960s when school children were sent into the countryside to teach one million illiterate Cubans how to read and write. Some were killed by counter-revolutionaries. Cuba’s literacy rate later rose to almost 100%.  Anita’s Revolution has been translated into Spanish for launching in February of 2016 at Cuba’s 25th annual Internacional Feria del Libro, the International Book Fair. Langer will attend Cuba’s Book Fair from February 11-21. The principal venue in Havana is the grounds and buildings of the historic Fortification of San Carlos, declared a World Heritage Site by UNESCO in 1982. In addition to the hundreds of publishers and book exhibits, there will be book and author related presentations as well as artistic events. One of those presentations will honour the 130th anniversary of the abolition of slavery in Cuba.

In addition to the opportunity to acquire books not available in Cuban stores, Cubans scramble for the free promotional “merch” that is part of every book fair. The 2014 fair saw over 2000 titles on sale with around 260 writers and intellectuals, 140 editors, 80 Cuban, 60 international, from 41 countries actively involved. Considered one of the foremost cultural events in Cuba, the fair attracted 387,000 in Havana.
“I have received an official invitation to the fair and will be there every day,” says Langer. “I speak Spanish and have retained my links with Cuba by returning to the island many times.”
Numerous British Columbians have written books about Cuba including Amanda Hale, Adolf Hungry Wolf, Alan Twigg, Linda Rogers, Rosa Jordan and Trevor Salloum.