A Better World is Possible

Guy Dauncey is an undaunted anti-dystopian. 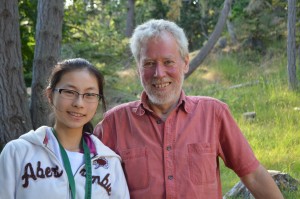 "Eco-hero" Guy Dauncey has been an enviro-mentor for Jenny Yu (left) and others. Now he's written an enviro-novel from his perspective as a "practical Utopian."

The futurist who started Victoria’s first car co-op has an impressive track record for encouraging people to imagine bold solutions to environmental challenges.

As one of the co-founders of the BC Sustainable Energy Association, Guy Dauncey is a visionary who might now be described as the polar opposite of William Gibson, having written his first, near-futurist novel, Journey to the Future: A Better World is Possible (Agio $27.95), set in the year 2032.

“It’s one thing to criticize from the sidelines,” Dauncey has said, “and to warn everyone about environmental degradation. That’s responsible and important work. But people need to also have an alternate vision.

“Before we can move towards a sustainable future, we have to be able to imagine it.”

Hence Dauncey’s tenth book is the story of 24-year-old Patrick Wu who time-shifts to Vancouver in 2032 where he discovers a world brimming with innovation and hope. Christy Clark and LNG are long gone.

Climate crisis is being tackled, a solar revolution is underway. A new economy has emerged in which the word fracking is not heard. Take that, Copenhagen. Move over, Stockholm.

Vancouver, as Mayor Gregor Robertson foretold, has become one of the world’s greenest cities. For four days Patrick explores the city, interviewing people, and asking a host of questions. How does a modern metropolis operate without fossil fuels? How are poverty, homelessness and affordable housing being tackled?

The protagonist Patrick has grown up mostly in Sudan where his parents helped refugees. (The ongoing horrors of civil war in South Sudan, the world’s newest country, have been largely overlooked these days due to the situation in Syria.) He visits a flourishing farm; he discovers how healthcare and education have changed. He visits a low income part of the city; he attends a Friday evening Song of the Universe. Politics and democracy are changing due to a popular uprising in a place called the OMEGA Days.

But it’s not all rosey. The rest of the world is not changing enough. Global warming persists. He attends a dinner party where he learns about something called syntropy, a scientific self-organizing principle that operates through consciousness…

After three years and 200,000 words of imagining a better world, Dauncey’s unorthodox story has been self-published, partly due to his futuristic beliefs in technology and partly because his main publisher over the years, New Society Publishers on Gabriola, doesn’t publish fiction.

Self-employed for more than 30 years, Guy Dauncey has travelled to India to study a Gandhian village, lectured in Britain and written The Unemployment Handbook (1981) while recovering from an automobile accident.

He followed that book with After the Crash: The Emergence of the Rainbow Economy (1987).

Dauncey is a co-founder of the Victoria Car Share Cooperative. In 2006 he was also a director of Prevent Cancer Now! and president of the B.C. Sustainable Energy Association.

With Ethan Smith, Dauncey co-wrote Building an Ark: 101 Solutions to Animal Suffering (New Society 2007), with a foreword by Jane Goodall.

The Climate Challenge: 101 Solutions to Global Warming (New Society, 2009) describes steps that are already being taken around the world to address climate change, showing how it is possible to reduce our carbon footprint to almost zero by 2040.

He is an Honorary Member of the Planning Institute of BC, a Fellow of the Findhorn Foundation in Scotland, and a motivational speaker. His websites are www.earthfuture.com and www.
thepracticalutopian.ca.

His extensive endorsements reveal the extent to which his work has been respected.

Guy Dauncey’s brilliant book shows there are solutions to the climate crisis that offer a future rich in opportunity and joy. All we need is to make a commitment to act. Guy Dauncey has written an imaginative tour de force, blending science, philosophy, and fiction into a delightful story about how we can and must change the world, resulting in a bright green future.

Guy Dauncey has done it again: married hope and practical reality. Most of us see obstacles? Guy sees possibilities. This is a must­read for despairing sustainability champions. Guy paints an inspiring vision of a sustainable future and shows us how we got there. Brilliant!!

Journey to the Future is a creative book that will leave you full of ideas and hope. Guy Dauncey has produced a progressive tour­de­force unlike any book that I have ever read. Part creative fiction, part manifesto for the world we want and need, this book is an inspiration.

Guy Dauncey has done it again. Journey to the Future: A Better World is Possible takes us to a thriving Vancouver in the year 2032. Using dialogue among characters proves a remarkably accessible way to demonstrate how a new, cooperative economy can emerge. The author’s unfailingly positive vision of democratic reform and sustainability is infectious. Richly footnoted and complete with many sources for future research, the “practical utopian” has equipped us with the tools to achieve a better world. Richly detailed—an amazing tour de force.

Member of Parliament for Victoria

In making our way from where we are to where we need to be, advice from the future would be helpful. A dystopian future world might warn us what to avoid. A more utopian society could give us hope. Somewhere between the two, from future conflicts, revolution and war to a sustainable society is where Guy Dauncey charts us in his novel Journey to the Future. It is at one and the same time a great yarn and a call to action.

Guy Dauncey is an eco-­hero whose enthusiasm for climate change solutions is infectious. Through remarkable creativity, Guy provides the reader with a glimpse into a plausible future that is vibrant, positive and joyful, while offering workable solutions to the major crises of our time. We owe Guy a debt of gratitude for his compelling narrative that fills us with hope and inspiration for a better future

One Response to “A Better World is Possible”