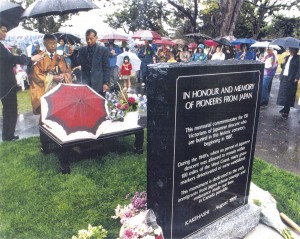 DIRECTIONS: Drive from the centre of the city along Fairfield Road. Arriving at Ross Bay Cemetery on the right, try to find a parking spot along the street or at Fairfield Plaza a few blocks down the road. Take the entrance opposite Ross Bay Villa House Museum, 1490 Fairfield (an 1865 house) and walk down the path past the cemetery office. Continue down the path and take the first path to the right. Walk along until the junction of two paths, then go left towards the water. You can’t miss the black monolith at the end of the path, the Kakehashi monument.

The Kakehashi monument which marks the largest grouping of Japanese graves in the Ross Bay Cemetery. An erection ceremony for the monument in 1999 began a process of recognizing Victoria settlers of Japanese descent. Biographical stories about some of the 160 Japanese pioneers buried in Ross Bay Cemetery are contained within Gordon and Ann-Lee Switzer’s Sakura in Stone: Victoria’s Japanese legacy (Ti-Jean Press 2015), a three-tiered study that also provides an updated overview of the Japanese presence in Victoria and identifies the first “true settler” in Victoria from Japan. Sakura in Stone includes a cemetery map with instructions for a walking tour of the graves. The Takata family ran the Japanese Tea Garden in Victoria from 1907 until forced expulsion during World War II.

According to new research, likely the earliest Japanese pioneeer in Victoria as a resident was Kisuke Mikuni, born in Okayama prefecture in 1855. Having met Charles Gabriel in Yokahama, he came to Victoria to be an employee at Charles Gabriel’s Japanese Bazaar, became a British subject, owned property, appeared on the voters’ list in 1898 and died in Vancouver in 1909. The Switzers have unearthed a photo of Gabriel and Mikuni outside of the Bazaar store as well as a seldom-seen photo of Mikuni and wife and his stepson Asajiro. It was taken by New Westminster-based photographer Paul Okamura who was named executor in Mikuni’s will.

Mikuni became an independent business man and as a director of the newly-formed Steveston Fishermen’s Benevolent Association he negotiated for better prices for their fish in 1901.

In 2016, Charles Gabriel’s house in Victoria where Mikuni and other Japanese boarded was still standing at 865 Academy Close.

Starting from the Ross Bay Cemetery, the couple first produced a booklet called Japanese Pioneers of Victoria in 2007, leading to more extensive research in the provincial archives and countless interviews. “A lost world had emerged,” they write. “Pieces of a puzzle had to be assembled.”

In 2012, a 380-page study by Gordon and Ann-Lee Switzer about the Japanese presence in Victoria, Gateway to Promise: Canada’s First Japanese Community (Ti-Jean $14.95), filled a major gap in B.C. history, recalling particulars such as the Japanese Tea Garden in Gorge Park and Japanese baseball (first played in Victoria in 1910), along with dozens of family stories. It received second prize from the B.C. Historical Federation of the annual Lieutenant Governor’s Medal competition for B.C. history.

Before Ann-Lee and Gordon Switzer joined the Victoria Nikkei Cultural Society and began their research into the history of the Victoria Japanese community for Gateway to Promise, he had lived in Japan from ages three to 20, and she had studied Zen at Hokoku-ji temple in Kamakura. For eight years the Switzers also published a Zen newsletter and they have published a book about gathering seaweed.

As well, Ann-Lee Switzer took over the role played by Carr’s longtime friend and editor Ira Dilworth, preparing 61 of Carr’s short stories for This and That (Victoria: Ti-Jean, $17), touted by publisher Gordon Switzer as the first collection of unpublished Carr stories to appear since 1953. Profits from books sales were allocated towards the erection of Paterson’s statue called “Our Emily” by sculptor Barbara Paterson. [In February of 2007, in the hopes that she would be contracted to produce a bronze statue approximately 1.5 times the life size of B.C.’s best-known artist, Edmonton-based sculptor Barbara Paterson unveiled a 60-pound brass maquette at Emily Carr House depicting Carr with one of her dogs and her pet monkey Woo on her shoulder. “I really think Victoria is missing the boat,” she told the Victoria News, “if they don’t [get it made]. You’ve got the biggest icon in the world with Emily Carr—she’s world famous and a character. So I’m ready, but I can’t wait forever.”

In 2004, the Parks and Recreation Foundation in Victoria created a fund to generate the $200,000 necessary to complete Paterson’s Carr project, which she commenced in 2001. The statue was finally erected across from the Royal Museum in 2010.]

Gordon Switzer writes, “Emily Carr’s This and That has just been published in Victoria, the first collection of her unpublished stories to appear since 1953. Contrary to popular opinion, we have not heard the last of Canada’s beloved artist and author, Emily Carr (1871-1945). During the last two years of her life, ill as she was, Emily Carr continued to churn out story after story, all drawn from the events and emotions of her fully-lived life of 70+ years. The same spring that had fed Klee Wyck, The Book of Small and other books was far from dry. While recovering from a stroke in 1943 at the Royal Jubilee Hospital, artist and writer Emily Carr decided to start a new writing project.

“In a letter to her friend and editor Ira Dilworth in 1943, she wrote: ‘My new write is a hodge-podge. It is at present called ‘Hundreds and Thousands’ . . . They are just little isolated incidences told as clean cut & briefly as I can . . . They will be here and there picked from my 70 years.’

“So what happened? Emily Carr died. Then Ira Dilworth died. In the interval and afterwards several posthumous works appeared. Then all of Emily Carr’s manuscripts, notebooks and letters landed in the British Columbia Archives. There they were accessible to researchers but ignored as a body of work.

Sixty-one of Emily Carr’s unpublished stories have now been collected into a book, titled This and That to avoid confusion with her published journals Hundreds and Thousands (1966) which were given a title intended for this collection of stories. For 60 years her last stories (and there are over 70 of them) slipped from view. Now they are available for all to savour, like the little candies the English called Hundreds and Thousands, “too small each to be taken singly but each complete in itself and serving to ornament life … the little things we don’t even notice or think of at the time but which old age memory magnifies.” (from Emily’s Introduction in This and That ) Drawn from all facets and periods of her life, they will enhance our picture of Emily Carr, full of the unique spirit, humour and colour we have grown to love. Ann-Lee Switzer with copies of This and That, raising funds for Carr statue

“This collection will round out our view of Emily Carr’s personality and will fill in the characters of her family members such as her mother and brother, who were not prominent in her other books. The stories will be of interest to Emily Carr devotees and historians alike, illuminating a world that time has passed by. These stories zoom in on all facets of Carr’s life. We see her father walking hand in hand with his little girl, talking about the moon. Emily complains about her birthday being too close to Christmas, but tells us about a tasty birthday tradition she cherished. She discovers her brother Dick’s clear blue eyes and his dreams for a future he never got to experience. The little gardens tended by the Carr children are as different as their personalities. The adventures of Emily’s trips to Nootka and other places off the beaten track and her reflections about religion, old age and death are all grist for the pen of a woman unique in her time and in ours.

“Because the stories were left by Carr in draft form — most are typed with hand corrections — it has long been obvious to the researchers that they needed work before they could be published. Carr scholars are aware, as was Emily herself, that spelling was not her strong point, nor was syntax. In the recently published letters between her and her editor Ira Dilworth (Linda Morra, Corresponding Influence, University of Toronto Press 2006, from which the above quotation was taken), Emily often discusses this point, and she relied on and trusted Dilworth in this matter. Most of all she did not want her stories prettied up and reading like grammar-school exercises. Dilworth responded with respect and judicious guidance, which she continued to appreciate, and that is why she left to him the remainder of her writings. In this collection published this month, editor Ann-Lee Switzer has been guided by the spirit of Ira Dilworth, to check for clarity and mechanics but not to alter the essence of Emily’s voice. In a few cases, two versions of a story have been combined, wording has been condensed. Also footnotes are added when meaning is obscure, as in archaic usage and historic references.

“This and That at 232 pages, has a soft glossy cover showing Emily Carr’s painting B.C. Forest (ca. 1938), and retails for $17. Emily Carr’s own introduction and dedication are followed by an essay by Victoria historian and writer Ann-Lee Switzer, who edited the stories.” Review of the author’s work by BC Studies:
Gateway to Promise: Canada’s First Japanese Community