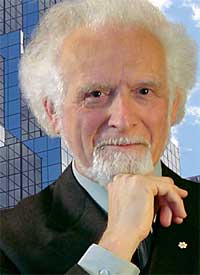 Instituted by community leader and philanthropist Dr. Yosef Wosk, The Max Wyman Award for Cultural Commentary is a new $5,000 biennial award celebrating critical writing and commentary on the visual, performing and literary arts.

Max Wyman, the first laureate, will be presented with a Lifetime Achievement Award in honour of his commitment and dedication to critical writing and cultural commentary during a ceremony and gala at the Vancouver Playhouse (600 Hamilton Street, Vancouver) on Tuesday, April 18 at 5:30 p.m.

The public is invite to attend this evening of words, dance and music to be hosted by Christopher Gaze, artistic director of Bard on the Beach Shakespeare Festival.

The Max Wyman Award for Cultural Commentary is produced by The Dance Centre in partnership with the BC Alliance for Arts + Culture.

Please contact Joyce Wan at the BC Alliance for Arts + Culture at 604 681 3535 or info@allianceforarts.com. Born in Wellingborough, England on May 14, 1939, Max Wyman studied piano and theory as a youth and began his career in journalism with the Northamptonshire Evening Telegraph at 14. Max Wyman came to Canada in 1967 and began writing for Vancouver Sun in 1968, later specializing in dance criticism while married to dancer and choreographer Anna Wyman. He later married former Sun music critic Susan Mertens. The couple moved to Lions Bay in 1978 and he became a naturalized Canadian in 1979.

As an author [see below], Max Wyman edited a collection of essays on Vancouver, written an appreciative biography of Vancouver jeweller Toni Cavelti and produced numerous books on dance. Dance Canada: An Illustrated History was named one of the “165 Great Canadian Books of the Century” by the Vancouver Public Library in 2000. The Defiant Imagination: Why Culture Matters (D&M, 2004) is a passionate argument for the return of the arts and culture to the centre of the public agenda. He also wrote the introduction to The Life & Art of Frank Molnar, Jack Hardman & LeRoy Jensen by Eve Lazarus, Claudia Cornwall & Wendy Newbold Patterson (Mother Tongue 2009).

Max Wyman was  appointed to serve as a member of the Canada Council in 1995. He later received the Order of Canada for his services to the arts, and an honorary doctorate from Simon Fraser University. He was appointed President of the Canadian Commission for UNESCO in 2001. In 2005, Max Wyman was elected as mayor of Lions Bay and remained as such until 2008. Wyman was also founding chair of the Metro Vancouver Regional Cultural Committee.