“Writing has to come first.” 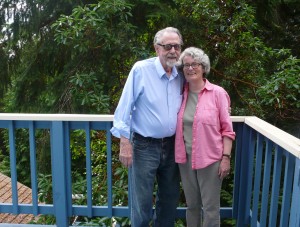 Robert Harlow and his fellow novelist Sally Ireland have lived on Mayne Island for thirty years.

He’s a Mayne Island magus, a magical master of words, according to Cherie Thiessen.

Growing up in Prince George, Robert Harlow wanted to be a travel writer at age nine, but his education was cut short when WW II broke out and he enlisted in the Canadian Royal Air Force at eighteen, flying Lancaster and Halifax bombers.

Harlow was awarded the DFC (Distinguished Flying Cross), bestowed for acts of valour, courage or devotion to duty while flying in active operations against the enemy, but he shrugs this off.

“I went blind in that last trip and had to fly the plane back with my engineer giving directions in my ear and finally we found an aerodrome and made somewhat of a landing. I landed on one wheel and then the other wheel went off the runway and we practically disappeared in the mud.”

He laughs recalling his heroism. “It was rough, but we weren’t injured. The time when we really crashed was when I got shot up during a raid and had no undercarriage so had to land on my belly and that’s hard to do. I did a perfect landing and it dug into the ground and fortunately didn’t catch fire. But no one wants to read about that now.”

The war over, the veteran enrolled at UBC and graduated in 1948 with a B.A. in English, studying under renowned poet, Earle Birney, who co-instigated, with Roy Daniells, and then headed up, the first credit course in Creative Writing in Canada.

Three years later, Harlow graduated from the University of Iowa’s Writers’ Workshop with a MFA, the first Canadian to be invited to attend. By the time he had finished with his thesis he had pretty much found his voice. He wasted no time. Shortly upon graduation he became the CBC Director of Radio for the B.C. region, a position he held for the next fourteen years, even while writing two of the three novels that would make up his Linden Trilogy (named after an imaginary northern B.C. town not unlike Prince George.) Royal Murdoch was published in 1962, followed by Gift of Echoes in 1965.

Also in 1965, Earle Birney asked him to take over as head of the UBC Creative Writing Programme. Harlow says he thought about that offer for about twelve seconds before he accepted. In 1972, the most widely-hailed third book of his trilogy, Scann, was published after Harlow had taken a sabbatical in 1970-71, going with his family to Majorca where he wrote the bulk of the novel in about eight months.

Although he retired as head in 1977, he continued to teach in the department until 1988, mentoring, encouraging and assisting many young writers—myself included.

Comfortably ensconced in the Mayne Island aerie of novelist and educator Robert Harlow, I’m now finding out more about the person who made such a difference in my life, the man who once told B.C. BookWorld editor, Alan Twigg, that a writer has to save his energy for writing, not ‘day jobs’, and who also said that successful writers are people with drive who have learned how to translate that drive into the energy that goes into writing.

For Harlow, writing and the teaching of writing are a whole lot about technique. He once told Twigg he thinks ‘strategies’ when writing. That’s how his first novel, Royal Murdoch, was written.

“I always thought about strategies,” he says, “about how you put a book together. I always used single points of view to organize a book. “Over the years I don’t know how many pages of stuff I tore up because I was allowing myself to get into it. That’s what technique is all about in writing; to get the author the hell out of his own work so it can be its own spontaneous self.

“An author should be able to write a full spectrum, not write himself over and over.”

And in addition to technique there’s that daunting word, discipline, a word that many novice writers eschew.

“Writing has to be like going to the office. Put your bum on a chair and stay there until something does or doesn’t happen,” says the seasoned writer. “Do it regularly and whenever you can. I’d get up at 6 o’clock, take my breakfast into another room, and I would write for several hours every day because at that time I had a family and a career. That’s how I got my books done.

“If you’re a writer it’s the writing that’s the major part of your life; it comes first. You do that and then you go to your job or your family or your lover. Writing has to come first.”

Several novels followed after the Linden trilogy: Making Arrangements in 1978, Paul Nolan in 1983, Felice: A Travelogue in 1985; The Saxophone Winter in 1988 and Necessary Dark in 2003, four years after he had made Mayne Island his permanent home. Faraday Comes Home, a self-published e-book, came out in 2012.

Now into his 90s, Robert Harlow lives quietly with his partner of 30 years, Sally Ireland, herself an author as well as an artist. The self-discipline that has always kept him on track is still as strong as ever. He continues to work in his office every morning, answering emails and keeping well abreast of the POD (print on demand) trends.

Discipline and technique. I think of him every time I head to my computer to put in my four hours a day. There be literary giants in our midst, but sometimes they tread so quietly you wouldn’t know it.

For further info on Robert Harlow, or to contact him for ordering information, go to www.robertharlow.com.

[This revised profile first appeared in Aqua magazine’s spring issue (April-May) and is reprinted with the permission of its author, who lives on Pender Island.]

One Response to ““Writing has to come first.””