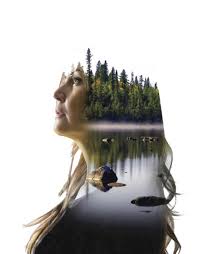 Now directed by Marisa Emma Smith of Alley Theatre, Ow’et / Lost Lagoon is being presented as a workshop production for a short run in June at the Firehall Theatre with lighting design from Itai Erdal, plus another dramaturg, a technical director, a video and production designer, an assistant sound designer, a sets and props designer, a sound director and composer…

This is almost the full meal deal, so you’d think someone would have thought to provide an explanation of the title in the program. Nowhere in Sparrow’s 85-minute monologue do we learn that O’wet (oh-wee) is a verb colloquially used to denote propelling a canoe. O’wet is also connected to a shaman’s canoe ride to the land of the dead to retrieve a lost soul. This explanation would help an audience understand why Sparrow spends about a fifth of her time on stage within a dream-like, mystical, canoe paddling pantomime, seemingly directionless, with no beginning, middle or end, bewildered and brave.

The conceit of a reconciliation journey—to come terms with her alcoholic father, who she had to take to an A.A. meeting when he was drunk, and to embolden her First Nations identity—is well and good. Having spent much of her professional life as a model, Sparrow has an attractive and poised presence that makes us amenable to accompanying her on her spirit quest.

We are impressed that she had a lucrative career in Europe and Asia selling products and going to fancy parties, and we are curious to know about her upbringing on an Indian reservation until age nine, as well as her childhood feelings about being an uncertain and vulnerable ‘half-breed’ in her formative years.

Trouble is, she’s not a story teller. There is no over-reaching story arc and she feeds us only snippets. The narrative constantly ricochets between First Nations stuff, modelling stuff, dream quest stuff and some shadow choreography.

Equally problematic, with the exception of her revelations about her father’s drinking, the writing remains self-protective. Once she discovered she was pregnant while modelling in Athens. The agency advised her not to have the child. We never know the circumstances, or who the partner was. If she has ever had the child, or a child, or if she has ever been married, well, that’s off limits.

We briefly learn there was once a partner named Sam. In New York. He was English. Sam’s father made a public announcement about them being engaged. But this guy had never asked her to marry her. We never know who Sam was, what happened to him, why she left him, or why he might have left her. Again, off limits.

But we does tell us she once got high snorting cocaine at a party in Italy. Guys took her to a castle-like place where there was more coke. Then she got into a car. The guy was driving way too fast. She thought she was being abducted. She freaked out. She tried to grab the wheel. But it turned out the guy was really just taking her back to the first party where she wanted to go. So nothing happened. Quelemia Sparrow began her successful, unescorted modelling career abroad at age fifteen. No parents, no chaperone. And it lasted for a long time. We learn told she once stole a pair of shoes. We gradually learn she is only telling what she wants us to know.

We do learn, near the very end, that she had a great-grandmother who once lived in the area of Stanley Park now known as Brockton Point. As the crow flies, that’s not that far from Lost Lagoon…

Just as likely the inclusion of Lost Lagoon in the title is metaphoric. Sparrow is most convincing when she mourns the loss of the natural world and wishes she could make the highways, cars and shopping malls disappear. Her wistful recollections of fishing with her Dad are accompanied by photos of her, seemingly happy, when she spent some of her summers with him on his trawler.

When Stacy Sparrow was given the lovely name Quelemia at age seven, she was proud and happy. So it is that the most engaging and poignant parts of this narrative are anecdotes that recall her relatively normal life within Musqueam culture—climbing on a roof, having her grandmother feed her egg and toast after school.

The use of grainy home movies from the 1980s and 1990s before and during the show adds a dignified verisimilitude to the narrative.

If they go back to the drawing board, the frantic dream stuff and the evasive modelling anecdotes could be diminished. We wish we could have spent a lot more time on that fishing boat with her Dad. So does she.