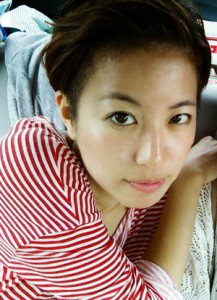 Harbour Publishing of B.C. has led the way with six nominations; the HarperCollins imprint in Ontario has four nominations. Caitlin Press of Halfmoon Bay, B.C. and Kids Can Press of Ontario have three nominees each. Ten nominated titles were published from the Sunshine Coast.

Double nominees this year are Caroline Adderson for adult fiction and illustrated children’s literature; scientists Richard Beamish & Gordon McFarlane who teamed up for The Sea Among Us, nominated for the best book about B.C. and the Bill Duthie Booksellers’ Choice Award; and Toronto illustrator Qin Leng [red shirt, right].

There were 26 nominations for women; 17 for men.

The West Coast Book Prize Society will announce the winners at the 31st Annual BC Book Prizes gala to be held  Saturday, April 25, 2015 at the Pinnacle Vancouver Harbourfront Hotel.

British Columbia’s Lieutenant Governor, the Honourable Judith Guichon, OBC, will be in attendance. Eve Joseph has one of four titles from HarperCollins.