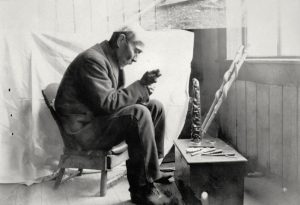 Colin Browne examines why his depictions of Raven seeking female genitalia are integral to the Haida cosmological narrative Xuuya Kaagang˖ngas. Charles Edenshaw (c. 1867-1920) is perhaps the most recognized and acclaimed Northwest Coast Indigenous artist of the late nineteenth and early twentieth centuries.

An outstanding feature of his work that separates him from both his contemporaries and forebears is his innovative portrayal of episodes from the foundational Haida cosmological narrative Xuuya Kaagang˖ngas, “Raven Travelling” or “Raven Walking.”

This narrative records the culture hero’s instrumentality in the creation of Haida Gwaii, the homeland of the Haida people, the mainland of the north coast, and human beings.

In Entering Time, The Fungus Man Platters of Charles Edenshaw, Colin Browne discusses in detail one particular episode from this narrative: Raven’s hunt for female genitalia.

After creating human beings, or rather discovering them emerging from a cockle or clam shell, Raven is asked by the newly-created women to provide them with the ability to continue human life. Edenshaw illustrates the hunt for female sexual organs on three circular engraved argillite platters and a small engraved silver band.

Each object depicts a canoe with a humanoid Raven in the bow armed with a spear, a steersman identified as Fungus Man in the stern, and below the canoes — the object of Raven’s quest — female genitalia.

Browne discusses the differences between the three plates and speculates, as others have, on the meaning of these differences, and he attempts to clarify the sequence in which the plates were made. He also includes detailed discussion about why an animated fungus was chosen as a steersman.

Browne is intrigued by Edenshaw’s decision to embed this creation story in four different objects, at least three of which were produced for sale to outsiders. It can be explained as one of economic necessity: the production of art-for-sale became an essential strategy for professional artists like Edenshaw as his pool of Haida clientele was diminished by population loss, by Christian missionary hostility, and by government prohibition to Haida ceremonial practice — which previously had driven the market for traditional and larger-scale ceremonial objects. Why he produced multiple versions of this traditional narrative in argillite and silver is not known but it may be related to Edenshaw’s apparent desire to preserve tangible evidence of the richness of Haida mythology, which was being lost by the encroachment of colonial belief systems.

Edenshaw was working at a time of huge cultural stress brought about by catastrophic population loss and by the state and church, which actively denied basic human rights and which may, in fact, have engaged in a program of cultural genocide.

The reality of this hostile environment has been taken into account by other authors, but what is notable about Browne’s approach is that he locates his own settler family in the same cultural milieu as Edenshaw and all Indigenous people in nineteenth century British Columbia.

Browne points out that the racist structures and forces that justified the appropriation of land and resources also worked to separate Indigenous and Settler populations physically, with the result that Browne’s family lived as strangers beside their Indigenous neighbours in their Cowichan Valley homes. Browne notes that relations between settlers like his own family and Indigenous people all over the British Empire “were shaped by a colonial culture in which dispossession and inequality were enforced by law.” Browne then asks how could Edenshaw negotiate an art practice in an environment of “rapacious imperialism” fraught with race-based inequality enforced by colonial and then by Canadian law?

Perhaps one answer can be found in an important aspect of Edenshaw’s life that Browne references, his strong Anglican faith, but which he does not seem to consider a major factor in Edenshaw’s ability to thrive in spite of all the negative forces surrounding him.

Edenshaw converted to Christianity in 1885, and although Browne suggests that his “theological beliefs do not appear to have entered into his carving and painting,” two small sculptures (not included here) attributed to Edenshaw can be interpreted as Mary and Joseph figures that combine allusions to the traditional Christian belief in the virgin birth of Jesus Christ and the traditional Haida belief that Raven was born before the world existed. While many collectors of Northwest Coast art have assigned Edenshaw’s argillite work to the denigrated category of inauthentic “tourist art,” Browne recognizes its vitality and authenticity. He is to be congratulated on treating Edenshaw’s work not as a separate “ethnographic” art but as modernist hybrid work that mirrored what was going on in the Haida world in late nineteenth and early twentieth century B.C.

Browne’s detailed discussion of Charles Edenshaw’s platters — and the political, social, and economic environment in which that creation took place — is informed by his dependence on the knowledge and insight of contemporary Haida scholars and artists and also by his extensive reference to academic discussion.

Browne’s insatiable curiosity and enthusiasm for Edenshaw’s exploration of this intriguing creation narrative make this wee book a delight to read and an accessible and lively introduction to the twists and turns of Haida mythology. Alan L. Hoover worked for 33 years at the Royal British Columbia Museum as a curator and manager. He contributed to The Magic Leaves: The History of Haida Argillite Carving (1984), and his articles include “Charles Edensaw and the Creation of Human Beings,” (1983), “Charles Edenshaw: His Art and Audience” (1995), and “Charles Edenshaw and the Development of Narrative Structure in Nineteenth-Century Haida Art” (2013).

2 Responses to “Why Edenshaw’s platters matter”