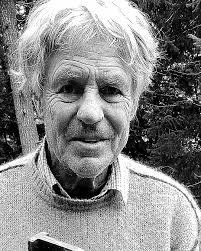 Robert Julian Wood has been a professional architect, a pioneering mountaineer, an organizer of ocean-to-alpine expeditions, an instructor of wilderness self reliance at Strathcona Park Lodge and a founding member of the Friends of Strathcona Park, a protest group that helped stop logging and mining in the park.

Born in 1945, Rob Wood grew up in a village on the edge of the Yorkshire Moors, in north Yorkshire, where his father introduced him to hill walking as a child. He began rock climbing at age 14.

After studying architecture for five years at the Architectural Association School in London, England, he made his way to Montreal and ended up in Calgary.

During his time in Calgary, Rob Wood became a pioneer of ice climbing and posted numerous first ascents in the Rockies during the early 1970’s. He was part of a two-man team that made the first British and Canadian ascents of the ‘Nose of El Cap’ at Yosemite.

Wood later ‘opted out’ by building a partially self-sufficient homestead for his family on Vancouver Island. There he became active in the Friends of Strathcona and the Strathcona Park Lodge Outdoor Education Centre. Rob Wood’s subtitled ‘autobiography from the Canadian Wilderness Frontier’ called Towards the Unknown Mountains focuses on winter ascents of Mount Waddington and Colonel Foster in Strathcona Park, but it also refers to his adventures in Scotland, Yosemite, Baffin Island and around B.C. With the companionship of his longtime friend and climbing veteran Doug Scott, Rob Wood recounts the development of ‘survival philosophies’ and his environmental awareness.

He is not to be confused with another Vancouver Island-based explorer, Gareth Wood.

Subsequently, At Home in Nature: A Life of Unknown Mountains and Deep Wilderness by Rob Wood is described by his publisher as the compelling story of one family’s life among the rugged landscapes of British Columbia’s Coast Mountains, “converting youthful ideals, raw land and a passion for the outdoors into a practical off-grid homestead.”

After his work in corporate Alberta had proved unfulfilling, Rob Wood and his wife settled on Maurelle Islandhe and erected an off-the-grid homestead. He developed a small house-design practice specializing in organic and wholesome building techniques.

Towards the Unknown Mountains (Ptarmigan Press, 1991)