We saw the world from a great height 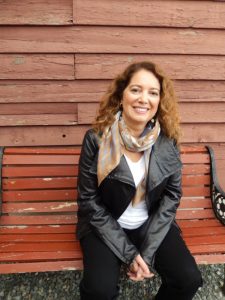 From vanishing wild cats, to poisoned oceans, to drowning valleys, the poems in The Schedule of Loss (Ekstasis $23.95) by Valentina Cambiazo are an elegy to those elemental forces we depend on, and barely understand.

Once the wreckage was complete,

I exchanged my heart with that of a nightingale:

and all it wanted to do was sing.

The nightingale was left to dwell

on all the grief in the world,

all the suffering she’d seen,

My heart and I now soared

up to a bright, blue sky;

we saw the world from a great height

cleansed of pain and poison.

And we sang, how we sang.

Born in Santiago, Chile, Valentina Cambiazo of Victoria has lived in Canada since the age of twelve. She has also lived in Spain, France, and the U.S. Her travels have taken her to eastern Canada, Chile, Mexico and Europe. Her first novel, Dark Spirit, is set in 14th century France.  Her memoir-in-progress is entitled Into the Heart of Darkness: Six Harrowing Months in the South of France.

“Her childhood in Chile and her teen years in Victoria, where her mother started a theatre company (they fled Chile during turbulent times), meant that when she arrived in Nelson to attend David Thompson University Centre’s School of Writing at the tender age of 19, she was already an old soul. I always looked forward to her stories,” says Caroline Woodward, “because they were like travelling to another world, one I hadn’t travelled to before, with a cast of characters far beyond the usual workshop suspects. I had no idea Valentina wrote poetry but she does. Wow.”

The public is invited to a book launch at Bastion Books, 14 Bastion Square, in Victoria, on Sunday, April 14, at 3 p.m.