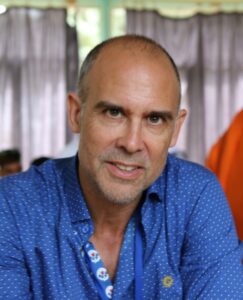 The Memory Seeker (Black Rose $22.95) to be released in February, 2023 is Ronald Niezen’s first novel. When Dutch-Canadian Peter Dekker is hired as an investigator by the International Criminal Court in The Hague, he has no inkling of the war crimes that lie in his own family’s history. His work takes him to Timbuktu, where he collaborates with Malian colleagues to document war crimes from a recent and only partly-ended civil war. While he is on assignment, his live-in girlfriend, Nora, gets to know Peter’s estranged aunt living in The Hague and uncovers a dark history of murder, revenge and collaboration with the Nazi occupiers. As the stories of his family under Nazi rule unfold and the intrigues multiply, Peter is confronted with a war crime in which he finds himself next-of-kin rather than an investigator. The Memory Seeker takes on the experiences of war violence and its aftermath, the vagaries of memory, and the incompleteness of courtroom justice pitted against the temptations of revenge. A professor  at the University of San Diego, Niezen completed a doctoral degree in Social Anthropology at Cambridge for which he spent ten months living and travelling in northern Mali. He splits his time between San Diego and Victoria, BC where he has been a longtime resident. 9781685131401