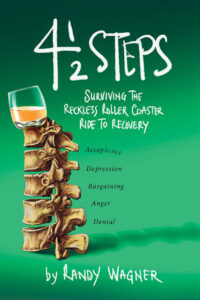 Randy “Wag” Wagner was looking forward to a new career as a soon-to-be Boston Pizza franchise owner, when he ran into a ditch after a night out with his wife. While his wife was unharmed, he became a C5-C6 quadriplegic.

At first Wag’s anger and depression define him, leaving his family wondering how he would survive once thrust back into “the walking world.” Wagner details what he went through both emotionally and physically in his memoir Four and a Half Steps: Surviving the Reckless Roller Coaster Ride to Recovery (FriesenPress $23.49).

Randy Wagner has been in a wheelchair for thirty-two years. Living in Blind Bay, BC, Randy has previously written editorials for the Maple Ridge Times and been a sportswriter for the Oak Bay Star. 9781039148963