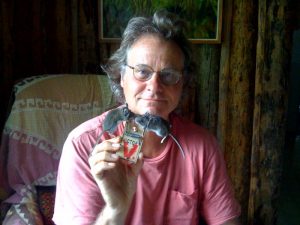 Of mice and mankind: Wade Davis, B.C.'s most widely travelled author, has won the Ryga Award.

The public is now invited to hear him at the Vancouver Public Library’s main branch at 7 p.m. on June 29 when he’ll receive this year’s George Ryga Award for Social Awareness.

Wade Davis Photographs (D&M $39.95) has been picked up by National Geographic for re-publication worldwide.

It didn’t hurt that the B.C.-born resident was National Geographic Explorer-in-Residence from 2000 to 2013.

Runners-up this year were Stephen Collis for My Blockadia (Talonbooks) and Eric Jamieson for The Native Voice: The Story of How Maisie Hurley and Canada’s First Aboriginal Newspaper Changed a Nation (Caitlin).

Davis has made seventeen films and written many books. His coffee table compendium Wade Davis: Photographs affords a tiny yet diverse glimpse into the thousands of images he created while visiting diverse cultures. Text and context is provided for the 140 photos selected for the book.

He writes: My goal was not to document the exotic other, but rather to identify stories that had deep metaphorical resonance, something universal to tell us about the nature of being alive…. Our mandate fundamentally was to provide a platform for indigenous voices, even as our lens revealed inner horizons of thought, spirit and adaption that might inspire, in the words of Father Thomas Berry, entirely new dreams of the earth.

For Wade Davis: Photographs, Davis selected favourite photographs from the thousands he has taken during his forty-year career. These intimate portraits of family and community life are universal in tone, and yet represent countless geographical and cultural spaces, telling the story of the human condition across the globe.

His photographs have appeared in many publications such as National Geographic, Time, Geo, People, Men’s Journal and Outside.

Currently Davis is the BC Leadership Chair in Cultures and Ecosystems at Risk at the University of British Columbia, a member of the National Geographic Society Explorers Council and Honorary Vice-President of the Royal Canadian Geographical Society.

Davis will receive the $2,500 Ryga Award at the Vancouver Public Library on June 29 at 7 p.m. It’s a free public event at which historian Rolf Knight will also accept the George Ryga Lifetime Achievement Award.

The George Ryga Award is jointly sponsored by Yosef Wosk, Pacific BookWorld News Society and Vancouver Public Library with support from the City of Vancouver.

Here is an excerpt from the book:

THE MYTH OF MODERNITY

Just before she died, anthropologist Margaret Mead spoke of her concern that as we drift toward a more homogenous world, we are laying the foundations of a blandly amorphous, generic modern culture that will have no rivals. The entire imagination of humanity might be confined, she feared, to a single intellectual and spiritual modality. Her nightmare was that we might wake one day and not even remember what had been lost. Our species has been around for some 200,000 years. The Neolithic Revolution, which gave us agriculture, occurred only 10,000 years ago. Modern industrial society is scarcely 300 years old. This shallow history should not suggest that we have all the answers for all the challenges that will confront us in the coming millennia.

All cultures are ethnocentric, fiercely loyal to their own interpretations of reality. Indeed the names of many indigenous societies translate as “the people,” implying that every other human is a savage. We too are culturally myopic, often forgetting that modernity is but an expression of our cultural values. It is not some objective force removed from the constraints of culture. And it is certainly not the true and only pulse of history. It is merely a constellation of beliefs and paradigms that represent one way of doing things.

Our achievements have been stunning. The development within the last century of a modern, scientific system of medicine alone represents one of the greatest episodes in human endeavour. Sever a limb in a car accident and you won’t want to be taken to a herbalist. But these accomplishments do not make the Western paradigm exceptional or suggest that it ought to monopolize the path to the future.

An anthropologist from a distant planet landing in the United States would see many wondrous things. But he, she or it would also encounter a culture that reveres marriage, yet allows half of its marriages to end in divorce; admires its elderly, yet has grandparents living with grandchildren in only 6 per cent of its households; loves its children, yet promotes 24/7 devotion to the workplace at the expense of family. By the age of eighteen the average American youth has spent three years watching television or playing video games. One in five adults is clinically obese. The nation consumes two-thirds of the world’s production of antidepressant drugs, even as it spends more money on armaments and war than the collective military budgets of its seventeen closest rivals. Technological wizardry is balanced by the embrace of an economic model of production and consumption that challenges the very life support systems of the planet. Our way of life, inspired in so many aspects, does not represent the supreme achievement of human endeavour.

The Serpent and the Rainbow: A Harvard Scientist’s Astonishing Journey Into the Secret Societies of Haitain Voodoo, Zombies and Magic (Simon & Schuster, 1986)
Passage of Darkness: The Ethnobiology of the Haitian Zombia (Chapel Hill, 1988)
Nomads of the Dawn: The Penan of the Borneo Rainforest, with Ian Mackenzie and Shane Kennedy (Pomegranate, 1995)
One River: Explorations and Discoveries in the Amazon Rain Forest (Touchstone, 1996)
Shadows in the Sun: Travels to Landscapes of Spirits and Desire (Pomegranate Art Books, 1998)
Rainforest: Ancient Realm of the Pacific Northwest, text by Wade Davis, photographs by Graham Osborne(Greystone, 1998)
The Clouded Leopard: Travels to Landscapes of Spirits and Desire (D&M, 1999)
Light at the Edge of the World: A Journey through the Realm of Vanishing Cultures (D&M, 2001, 2007).
The Lost Amazon: The Photographic Journey of Richard Evans Schultes (D&M, 2004)
Grand Canyon: River at Risk (Insight Editions / Palace Press 2008)
The Wayfinders: Why Ancient Wisdom Matters in the Modern World (Anansi, 2009)
Into the Silence:
The Sacred Headwaters: The Fight to Save the Stikine, Skeena, and Nass (Greystone Books/David Suzuki Foundation 2011; republished paperback Greystone, 2015) 9781553658801
River Notes: A Natural History of the Colorado (Island Press 2012). $22.95
Into the Silence: The Great War, Mallory, and the Conquest of Everest (Vintage 2012)
Wade Davis: Photographs (D&M 2016) $39.95 978-1-77162-124-3
Cowboys of the Americas, with photos by Luis Fabini (Greystone, 2017)