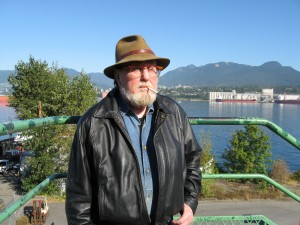 B.C.’s foremost historian of the working class, Rolf Knight, will finally get the recognition he deserves when he receives the George Woodcock Lifetime Achievement Award at VPL’s main branch on June 29 at 7 pm. Free to the public.

He will receive $5,000 from sponsors Yosef Wosk and the Writers Trust of Canada and plaque will be added to the VPL’s Walk of Fame.

Here are Knight’s comments on receiving this recognition.

“Books and reading have always been important to me. Along with playing around the docks and rail lines of East Vancouver I voraciously read titles by Max Nomad, George Orwell, Theodore Plievier, Upton Sinclair and hundreds of other authors whose names I have now forgotten. I lugged home packsacks of books by the hundreds from the old Vancouver Public Library at the corner of Hastings and Main. I now would like to thank the librarians of that institution for the wide and varied fund of human knowledge they preserved and presented to us. It really was the fundamental school of my childhood and youth. It was a major center of my town. Down near the Rex cinema and the White Lunch, which I’d also hit if I had any cash. A little of this is preserved in my own accounts of the region. It was an important part of working class Vancouver then.

“I certainly didn’t think that so much of my life would be taken up by writing. In fact until well after I’d taken a Ph.D from Columbia University I looked up at most writers, at least those I appreciated, and thought that producing a book was a marvelous endeavor, something that probably was beyond me. My first volume was a life history of my mother. Something that I knew would trigger snotty commentaries of undergraduate Freudians and their ilk. It sort of surprised me, the amount of appreciative and sometimes insightful commentary it generated. Even the ingrained anti-German racism it attracted was minimal. After more than thirty years of writing it’s still one of the best of my books, A Very Ordinary Life. “Ruichi Yoshida’s A Man of Our Times is the life history of an 89-year-old Japanese Issei-Canadian who came to British Columbia in 1910 and who worked as a logger and fisherman most of his life. Although he once had a certain fluency in English, over the years he had returned to using Japanese so I had to address my questions and translate his replies through a speaker of that language. My use of Maya Koizumi in that role proved to be a fortunate one since she could translate what I was trying to get at both fluently and incisively. We interviewed Yoshida and his wife in their home in the Kootenay’s over the course of a week and then went off to work up the material gathered. A Man of Our Times proved to be a moving endeavor. And despite Yoshida’s initial qualms it proved to be a fairly accurate account of his life and times. It did not, however, find favor with those who find every member of every distinguishable cultural group as conveying some unique view of the world. Yoshida was a socialist and a leading figure in the Japanese Labour Union and as such did not cater to those eager to find unique cultural views in every distinguishable group. It was an honor to work with him. He died shortly after the book came out but not before he could send copies of it to his remaining friends and associates.

“Traces of Magma was a very different kettle of fish from my earlier books. It is an annotated bibliography of select left wing novels from around the world during the twentieth century. The amount of work and research that went into it was absolutely phenomenal. It lists some three thousand odd titles from the Soviet Union to Guatemala and reaches far wider than socialist realist works. It took me three years of research, sometimes working twelve hours a day, to dig up the material. It was a hell of a task, but apparently no one except me wanted it. I finally wound up printing some five hundred copies under the imprint of Dragerman Books. But no one reviewed it or felt it necessary to refer to it.

“With that I almost stopped writing. However, I didn’t. Instead I wrote something called Indians at Work, An informal history of Native Indian labour in British Columbia, 1858-1930. That was a topic I had been collecting material on for ten years. It also took me about three years to research to write it up. It attempts to weave together scholarly accounts with autobiographies and life histories and deals with various phases of BC history but it is about the history of native workers. It was about the only one of my books which received serious mention, and for a few tears had some impact on those writing about native people in this province.

“Following that I turned out something entitled Along the No. 20 Line, an account of the street car line running along the Vancouver water front between 1913 and 1945. About one half of it presents my account of people, sights, sounds, aromas and places you’d meet on the trip along the Vancouver industrial water front from Hastings Park to Hastings and Granville in mid 1945, the year the line closed down. It contains mini life histories of ten people then living or working along the No. 20 line in the 1930s and 1940s.

“In 1998 I turned out a life history of fishermen’s union leader Homer Stevens (Homer Stevens: A life in fishing). It was a difficult work to produce. But finally I turned out an autobiography which was acceptable to both of us.

“My final published work is a book entitled Voyage Through the Past Century. It is a kind of autobiography but one in which most chapters are divided into sections called archives which are intended to be more or less objective accounts of the times and places dealt with (coastal logging and construction camps in the 1940s to colonial Nigeria in the 1960s to New York and Columbia University in the later ’60s, etc.) and a more subjective account dealing with my personal involvement with them. That didn’t turn out as well as I’d hoped. But still I’m happy to claim the work as mine. It runs from early 1940s to the end of the twentieth century. A century I’m proud to have been a part of.

One of B.C.’s foremost oral and labour historians, Rolf Knight has been a steadfast enemy of the notion that there exists such a phenomenon as the common man. The son of an itinerant cook, he was born in 1936 and grew up in a succession of B.C. logging camps during the 1940s and 1950s. He gained his B.A. from the University of British Columbia in 1959 and his M.A. in anthropology at UBC in 1962. He received his Ph.D. from Columbia University in 1968. He taught at both Simon Fraser University and the University of Toronto.

In 1974, Rolf Knight collaborated with his mother to trace her difficult life from Berlin to Lillooet goldpanning onto a succession of upcoast logging camps. His mother Phyllis died in Burnaby at age 76, shortly after their book called An Ordinary Life was finished. In 1977, Knight left his tenured position, disaffected by the narrowness of his fellow academics and the ignorance of his students. He returned to drive a taxi in Vancouver, simultaneously producing a string of books that dignify, and show the complexity and sophistication of, the so-called working class. Knight remained angry about stereotypes, romanticization of labour and other invisibilizing forces of mainstream history.

“It is time that the generations of Indian loggers, longshoremen, teamsters, cowboys, miners (farmers), fishermen and others who labored in virtually every primary industry…were recognized,” he wrote in Indians at Work. “Wage work in the major industries…has been an intimate feature of Indian lives for five and more generation.” Indians at Work is a wide-ranging study, with an excellent bibliography, and it often bristles with Knight’s impatience with shallow or conventional attitudes. “One of the great misconceptions of native Indian history in BC,” he writes, “is the vision of a golden past age. In this view, indigenous societies on the North Pacific coast existed in a veritable Garden of Eden where ready-smoked salmon flanks launched themselves, glittering, from the streams into trenches of salalberry and oolichan sauce, where a superabundance of foods was always and everywhere available with the merest of effort; a veritable land of Cockaigne. In such accounts, wars and raids were mainly rough games for prestige, slaves were not really slaves, chiefs were the servants of their people, all necessities were shared, and settlements were rife with cooperation and equity. Spiritualism and traditions reigned supreme and almost everyone was part of one big family…. Popular conceptions generally disregard or gloss over considerable evidence of suffering, hardships, and oppression between and within the indigenous Indian societies. While this is not a justification for the varied inequities which followed in the wake of European settlement, it should remind us that native Indian societies did not witness a fall from natural grace at the arrival of Europeans. Given the fantasies about the native past which now pervade the mass media, and even public education, the above point cannot be made strongly enough.”

In 1992 Rolf Knight received the Canadian Historical Career Award for Regional History. He returned to print with a biography about Homer Stevens, leader of the United Fishermen and Allied Workers Union. With nine books to his credit, he remains one of the most under-recognized historians of B.C.