One man’s garbage, another man’s art

Sharon Kallis has long used discarded materials in her art. 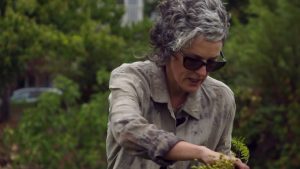 Eco-artist Sharon Kallis likes finding stuff that is “free for the taking" such as plant clippings.

She collects floor sweepings of dog hair to spin and weave into slippers and makes outdoor sculpture out of green waste. 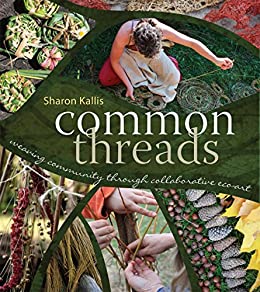 Ten years ago, artist Sharon Kallis worked with Stanley Park Ecology Society to find new ways to deal with the mounds of waste from invasive plant species the park generated rather than just incinerate it.

“Any potential good the plant might have done in carbon sequestration, is gone up in smoke,” she says in Common Threads: Weaving Community through Collaborative Eco-Art (New Society, 2014).

There was another problem the park needed Kallis to solve: after pulling up weeds and invasive species, topsoil was left exposed to the elements and subject to erosion.

Kallis was against buying foreign-made netting (regularly used to protect bare soil) with all the negative environmental impact its importation entailed. So, she began experimenting with techniques to ‘crochet’ or ‘knit’ the most common form of invasive plant in the park, English Ivy (after it had been dried and was dead) to make a natural netting to protect Stanley Park’s topsoil until native species returned. Eventually the dried ivy would erode into the earth, providing extra nutrients to the soil.

The technique of making the natural netting was so easy that passersby could be taught and many joined in the knitting process. It became a learning moment as Kallis was able to describe to her new “volunteers” the negative impact of invasive species, even those as attractive as English Ivy. The hope was they would stop using invasive species at home, thereby preventing their spread.

It also created a strong sense of community that came with its own benefits. Kallis notes in her book “…when we work with others, our potential increases exponentially, and we learn to draw on each other’s strengths and support each other through challenges.” 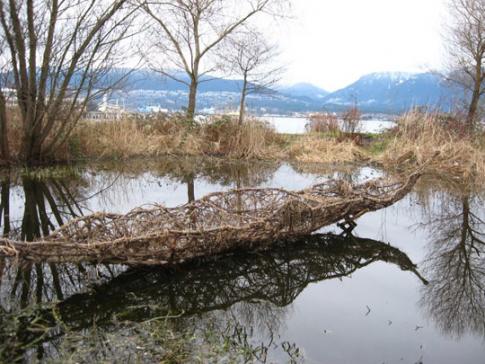 Prior to working with SPEC, Kallis had long used discarded materials in her artwork. She liked to find stuff that was available and “free for the taking.” She gradually learned that seeking such materials helped her get closer to the environment. It also gave her the impetus for thinking about creative ways to use the things around her.

Soon, she was collecting floor sweepings of dog hair to spin and weave into slippers. She began making outdoor sculpture out of green waste such as dogwood tree clippings, often drawing in other people to participate.

She became a connector between people of different disciplines. “In my work that often means connecting ecologists and environmentalists or gardeners with a creative community to work with green waste piles …which have been removed.”

“I know that enough of anything can be made into something,” she says. “Discovering what that something is can be an incredible journey – learning skills, developing a seasonal awareness, fostering community and building self-empowerment with a do-it-together attitude.”

Now available as an audio book, Common Threads (New Society $31.99), will reach more people than ever.

“In general, I hope this book creates a framework of possibility, allowing you to see what is ‘unwanted’ in the world around you as a creative resource waiting to be harvested.”