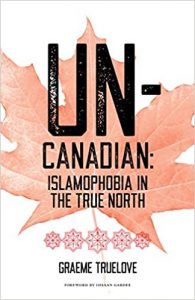 Graeme Truelove, author of the critically acclaimed biography Svend Robinson: A Life in Politics (New Star Books, 2013), which was shortlisted for a 2014 BC Book Prize and was also a BC Bookworld bestseller, has been shortlisted for an Ottawa Book Award for his second title, Un-Canadian: Islamophobia in the True North (Nightwood Editions $21.95).

Un-Canadian is a warning to Canadians that the values they cherish are being eroded through a pattern of political, legal and social prejudice directed towards Muslims in Canada since September 11, 2001. Featuring never-before-published interviews with key politicians and journalists, influential Muslim leaders and ordinary Canadians who have suddenly found themselves thrust into what might become a full-fledged culture war, this book sounds the alarm about our politicians, our commitment to the rule of law and the changing value of our citizenship.

Shortlisted in the English Non-Fiction category of the Ottawa Book Awards, Truelove joins other candidates Mark Bourrie, for Bush Runner: The Adventures of Pierre-Esprit Radisson (Biblioasis); Charlotte Gray, for Murdered Midas: A Millionaire, His Gold Mine, and a Strange Death on an Island Paradise (HarperCollins); Amanda Jetté Knox, for Love Lives Here: A Story of Thriving in a Transgender Family (Penguin Random House); and Beverley McLachlin, for Truth Be Told: My Journey Through Life and the Law (Simon & Schuster).

The winner will be announced at a virtual awards ceremony, which will take place on Wednesday, October 21 at 6 p.m. EST.

Raised in Delta, B.C., Graeme Truelove was an intern in Svend Robinson’s Ottawa office from 2002 to 2004, so he caught the tail-end of one of the most fascinating careers in Canadian federal politics.

He has worked on Parliament Hill since 2001 and now lives in Ottawa with his wife and daughter.