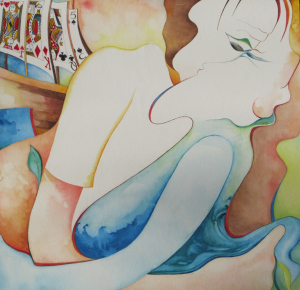 Having taught himself to paint while teaching law in Newcastle-under-Lyme, England, Christopher Nowlin now lists his painterly influences as “Surrealism, shadows and the Spaghetti Western long shot.” Currently teaching law at Langara College, he will dually launch his latest collection of paintings and his new graphic novel, Tough Tiddlywinks, at Havana Gallery on Commercial Drive in Vancouver, on Sunday, March 23, from 4 to 7 pm. [The title of his most recent painting, shown at right, is ‘Swimsuits.’]

Tough Tiddlywinks investigates the murder of a sleazeball Vancouver real estate developer named “Condo King” Donald Dickerson in the wake of the 2008 US stock market Even though many people would have liked to see this philanderer off the planet, police arrest a First Nations man, Ryan Ghostkeeper, who is found with the murder weapon, a knife. A hung jury prompts Vancouver Police Sergeant Sandra Wolychenski to reevaluate the case and investigate a member of an anti-development group called The Resistance, Slim Jimmy, among a cadre of hard-core bicyclists. Two wheels good; four wheels bad. Nowlin’s background in law permeates this whodunnit that serves as a showpiece for his art.

Nowlin’s multi-faceted, self-published first novel To See the Sky (Granville Island 2007) is an ecologically sensitive crime novel set against the backdrop of controversial construction projects for the 2010 Winter Games in Vancouver and Whistler. The title To See the Sky is derivative of the Sea-to-Sky Highway that connects Vancouver to Whistler. After the proposed expansion of that highway generates social unrest, two children disappear and their father becomes the main suspect. Elements of satire are mixed with the author’s fairy tale overview, making this story into a pentathalon of writing styles. Is it a literary novel, crime novel, satirical novel, fairy tale or social protest novel? Vancouver is renamed Olympia, West Vancouver becomes West Olympia, Squamish is Squamoosh and Penticton is Penwickton. The novel’s environmentally conscious protagonist, Demme Astrilsun, is independently wealthy.

“I’ve lived in various cities across Canada,” Nowlin told the Calgary Herald, “and I’ve never witnessed the same sense of affluence, the same self-confidence that you get in Vancouver. I just wanted to question in a fairly satirical way the rationale that we need the rest of the world to put Vancouver in the spotlight [with the Olympics].”