Tip of the iceberg lettuce 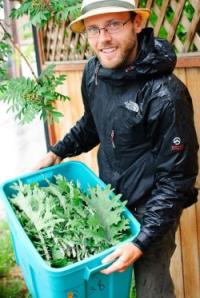 When water restrictions were placed at Level 4 on the Sunshine Coast this summer, many citizens were angry because they had become dependent on growing their own food. That’s just the tip of the iceberg lettuce. As revealed in Curtis Stone’s The Urban Farmer, Growing Food for Profit on Leased and Borrowed Land (New Society $29.95), there are some 40 million acres of lawn in the U.S. (Canada is on par, per capita) that could be used to feed 355 million people a 2000 calorie/day diet for one year. The trend towards “local” will soon become more than a fad as consumers increasingly prefer the freshest produce money can buy. The Urban Farmer is described as a comprehensive, hands-on, practical manual to help you learn the techniques and business strategies you need to make a good living growing high-yield, high-value crops right in your yard. Curtis Stone is the owner/operator of Green City Acres, a commercial urban farm based in Kelowna, BC. Farming less than half an acre on a collection of urban plots, Green City Acres grows vegetables for farmers markets, restaurants and retail outlets. 9780865718012