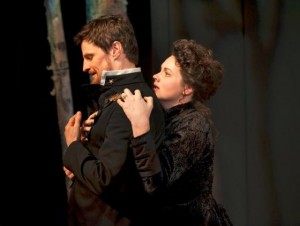 A strong argument can be made that Anton Chekhov—the disaffected Russian physician often cited as one of the inventors of the modern short story—is the second-most popular playwright on the planet.

Only Shakespeare, in 2011, outranked Chekhov in terms of the number of movie adaptations of their work. According to the data base IMBD, the rankings were William Shakespeare (836 titles); Anton Chekhov (324 titles); Alexandre Dumas père (245 titles); Edgar Allan Poe (243 titles); Agatha Christie (126 titles).

In North America, we see about twenty times more Shakespeare than Chekhov. That’s because nobody slices off a head; there are no double suicides; no overt clowning; there are no mad men on the heath, nobody talks to a skull in their palm. With Chekhov, the challenge is to make an alluring presentation of the deeply human trait of ambivalence, a trait that Chekhov understood all too well, and portrayed with numbing persistence in both his stories and his plays.

Before he finally and reluctantly married the actress Olga Knipper, Chekhov, an aloof and teasing bachelor, confided to his closest male friend that he only wanted a wife who would come and go like the moon. Sure enough, during his short-lived marriage, he and Olga lived apart half the time, ostensibly for health and career reasons. The truth went deeper. Even in love, Chekhov could not be whole-hearted, and he knew it.

If you overplay Chekhov, it’s deadly. Consequently theatre patrons around the world have groaned and snored their way through thousands of atrocious productions of his four best-known works: The Seagull, Uncle Vanya, Three Sisters and The Cherry Orchard. Chekhov, whose naturalism was a shocking revelation in the late 1890s, has yet to be risked by the Arts Club after forty years.

Therefore, for a new theatre company to mount a much-better-than-merely-proficient debut with Three Sisters is the equivalent of hitting a home run at your first major league at bat. As directed by Jane Heyman, The Only Child Collective has knocked it out of the park.

With the exception of only a few actors in this 13-person ensemble, Three Sisters is a thoroughly enjoyable two-and-a-half hours, highly recommended, and even exciting when one recognizes the boldness of the choice. With only a few cast changes, this Three Sisters—benefiting from Pam Johnson’s sublime set, Mara Gottler’s intelligent costumes and Itai Erdal’s impeccable lighting—is a smartly directed show that could merit heartfelt applause on any stage in any English-speaking city on the planet.

The story, as most people can vaguely recollect, concerns three sisters who are marooned in a provincial town, pining for a return to Moscow. The eldest sister Olga bemoans her job as a schoolteacher; she’d marry if she could, but nobody has asked her. The youngest sister Irina has a suitor, but he is feckless sophist. The middle sister, Masha, has ruefully married at age 18 to a pedantic, full-of-himself schoolteacher. (Masha was the name of Chekhov’s sister and his self-elected business manager and homemaker, and this role was initially played by Chekhov’s lover, Olga Knipper, who became his wife. It’s the key female role, even though she has less dialogue.)

The sisters’ beloved father has died about year ago. Their listless brother is accumulating reckless gambling debts. To make matters much worse, he has married a cruel and self-righteous shrew who terrorizes the servants and acts superior because she has given birth. A drunken and incompetent uncle adds to the din of drivel that passes for conversation.

Our three sisters are loosing control of the paternal household with a slow desperation that becomes heightened when the local militia, the sisters’ only source of diversion and potential escape, is rumoured to be pulling up stakes for some far-off location, later identified as Poland. For Masha, hopelessly in love with the married soldier Vershinin, this news is horrific.

It was his friend Maxim Gorky who observed that Chekhov spent his entire life trying to combat vulgarity. Certainly this production does a fine job making Chekhov’s distaste for vulgarity palpable. By vulgarity (a word that occurs twice in the play) we mean all manner of meanness, vanity, self-centredness, hypocrisy, sloth, toadyism, pomposity, dissolute behaviour and so on.

Along these lines, Richard Newman is disturbingly adept at portraying the scandalously inept and drunken doctor/uncle Chebutykin; Adele Noronha and Luc Roderique are both over-the-top as the shrieking sister-in-law Natasha and the odious and violent soldier Solyony, but at least they have the saving grace of giving us someone to detest. Alex Rose as the brother Andrei conveys a stunning transition from the unsympathetic violinist who literally fiddles when the town burns to a sympathetically self-aware man, as trapped as his sisters, in the final act.

The strength of this production, however, rests on the two outstanding and galvanizing lead performances by Bob Frazer (as the Chekhovian prototype Vershinin) and Emma Slipp (as Masha, seeking truth as much as an escape to Moscow). When they finally kiss with passion, and their star-crossed love is defiantly acknowledged to themselves and others, it feels like a vindication for the audience, too. Yes! Resist suffocation at all costs.

An earlier moment when Slipp smothers despair by crying aloud into a pillow is mesmerizing. Even when she is not speaking—which is most of the time—we are watching her face, seeing her feelings and thoughts. Rachel Aberle as Irina gains some momentum and credibility as the show progress, but it is unquestionably Slipp, from the outset, when she expresses her alienation by keeping her nose in a book, who provides the simmering heart and soul that keeps the audience alert and compassionate.

Frazer is remarkably adept at voicing Chekhov’s philosophical musings with dignity, saying happiness is impossible. Mired in a marriage to a suicidal woman (as Chekhov felt himself to be mired in his lifelong support of his parents and siblings), Vershinin’s greatest hope is that humanity can evolve so that possibly the descendents of descendents of descendents might inherit a better world. That is Chekhov talking. Frazer manages to elevate despair into nobility, without posturing, while maintaining a manly presence. It only makes sense that Masha would crave his arms.

The plot ensures there are no happy endings for the characters, but Chekhov’s humanitarianism is profoundly moving, inspiring. There ought to be some theatrical equivalent to Samuel Johnson’s dictum, ‘Any man who grows tired of London is tired of life.’ Any theatregoer who doesn’t find Chekhov deeply satisfying has some growing up to do.

If he could live his life over again, Chekhov said he would like to be a psychiatrist. He believed in science, not religion. He wanted to lift humanity out of the mire and muck of tawdry survivalism, fear and violence. That’s what Three Sisters is about. Recognizing and rejecting vulgarity. Consequently it’s not a depressing play at all; in fact, contemporary Russian audiences found it exhilarating.

Give them applause. Give them money.