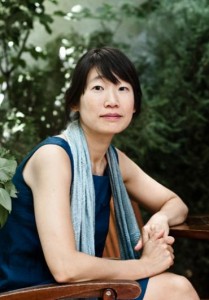 Born in Vancouver, Madeleine Thien, the daughter of Malaysian-Chinese immigrants, was taught to read at age three by her older sister. Shy and inarticulate, she retreated into literature while growing up in an immigrant family. Now her third novel, Do Not Say We Have Nothing (Knopf $35), is one of six works of fiction to be shortlisted for the Man Booker Prize.

The inter-generational novel follows the lives of a group of musicians studying Western classical music at the Shanghai Conservatory in the 1960s and the resulting impact of the 1989 Tiananmen demonstrations. In 1991, ten-year-old Marie and her mother invite a guest into their Canadian home. Ai-Ming is a young woman from China who has fled following the aftermath of the Tiananmen Square incident. 9780345810427

With her first short story collection Simple Recipes (M&S), Madeleine Thien received the City of Vancouver Book Award for the best book about the city in 2001. She also received the VanCity Book Prize for best book pertaining to women’s issues and the Ethel Wilson Fiction Prize. [See review below].

Prior to this notoriety, Thien was the second recipient of the Asian Canadian Writers’ Workshop Emerging Writer Award (EWA) that was established in 1999 to help authors of Pacific Rim Asian heritage be published with an established publishing house. The winner of the first award was poet, Rita Wong (Monkeypuzzle, published by Press Gang.) Thien won the second award in 2001 for her short story collection, Simple Recipes. This manuscript sufficiently impressed McClelland & Stewart and she was offered a two-book deal. Misbehaving adults are sometimes just people looking for love, or suffering from a lack of it.

In Four Days from Oregon, Irene is having an extra-marital affair with a fellow employee. Upon being found out, she takes her three very young daughters away from their father and home in a dramatic getaway. The lover, mother, and girls make for a chaotic fivesome travelling down the Oregon coast, sleeping in tents.

In a society hell-bent on ‘commitment’ and ‘for better or worse,’ even the most liberal reader can’t help but feel Irene is wreaking havoc. This could be a reckless, selfish act—the kind of thing children just don’t recover from. In Simple Recipes (M&S $22.99) Madeleine Thien, 26, however, doesn’t write stories that fit neatly into standard expectations.

Prior to the camping trip, Irene’s children have tiptoed around pieces of glass broken in fits of rage. Irene has woken her girls in the middle of the night, to tell them all the ways she is unhappy. And she has joked about leaving when she turns thirty. “Almost there…better pack your bags.”

Years later, after leaving the husband that watched apathetically whenever she slumped to the floor in depression, Irene is still living with Tom, the man who helped her to escape.

The story is narrated by one of the children. “Tom did what my father had never done—he followed her, down the front steps, into the street. From inside, we could see the two of them standing together, heads touching, a moment of stillness, before they started back to the house.”

Their natural father writes rare, formal letters; Tom gives $500 to his 17-year-old stepdaughter so that she, too, can run away from the pain of her adolescent life.

Thien doesn’t let us cry ‘sinner’ only to pack up and move on in judgmental glory. Other mothers in this book make different choices. The sensitive and forgiving narrator in “House” sits with her older, 13-year-old sister, on the front lawn of their childhood home where they lived before foster care.

It’s been a year since their mother walked out the door and down the street with nothing but her purse. It is their mother’s birthday, and since she never drinks on her birthday the girls think she might remember to come home. The only one who comes is their father, the man who couldn’t take care of them alone. The three abandoned souls sit on the curb and wait, on the cherished day of sobriety.

“She never drank like other people, in celebration,” the narrator observes.

In Simple Recipes, the reader is compelled to consider why people inflict suffering they’ve known on others.

Thien is not averse to exploring dark territory. The father in “Bullet Train” makes his terrified son sit on the roof as punishment, above the room where his mother dies of cancer. Fed up with the degrading ritual, the boy tries to run away. His pleading father explains, “I know you hate it up there, but it will make you stronger. No matter what happens to you from now on, you’ll always have this well of strength to draw on.”

In “Alchemy” Paula is a curious and sexual teenager before becoming a bulimic cynic, begging her best friend to sleep over every night. The two girls try to free rabbits from a backyard hutch before Paula’s overworked mother can break the rabbits’ necks and drain the blood. “Be free or be stew,” Paula cries out.

But those rabbits won’t run away, even though the door is open. Because they haven’t known any freedom, they will become stew.

The real problem in this story is Paula’s father and what he keeps doing to her in the shed. “Alchemy” could be the story of many runaway women fighting for their lives on the street—first being unable to fight off their fathers.

Madeleine Thien attended UBC’s Creative Writing Department and has worked with the Press Gang collective. This is her first book. Racial tensions are evoked in two of the stories. In the longest and final story, “Map of the City,” immigrant parents break-up over their varying abilities to forget Indonesia and adapt to Canadian life. 0-7710-8511-7