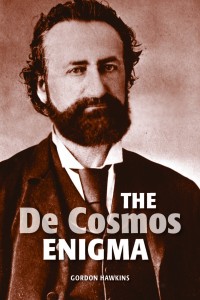 Gordon Hawking’s new biography of Amor De Cosmos, The De Cosmos Enigma (Ronsdale $17.95) explores the life and career of this most eccentric of Canadian politicians, a man who played a crucial role in the creation of present-day Canada from sea to sea, and yet who, by the end of his life, was little remembered. Hawkins reveals how De Cosmos began public life as one of the most feared journalists in British Columbia, and how, as an outsider, he had to force his way into politics, eventually becoming B.C.’s second premier, and then elected to the House of Commons. Of particular interest is the discussion of what caused De Cosmos to change his name in the goldfields of California from William Smith (who had been a quiet young man in Nova Scotia) to the most unusual “Amor De Cosmos” — lover of the universe. Delving into archival sources, Hawkins offers a portrait of De Cosmos in his struggle with the Hudson’s Bay Company, his fight for the union of the two colonies on the West Coast and finally for British Columbia’s joining of Confederation in 1871. Although De Cosmos never married, he offered a trenchant critique of Canada’s dark-age divorce laws. 978-1-55380-353-9