The fire that decimated Vancouver 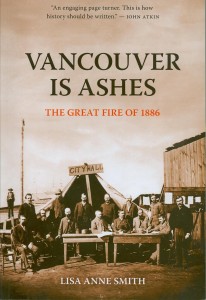 Vancouver is still a frontier town at dawn on June 13, 1886. Its main street is dirt. Residents don’t have to walk far to head into ancient-growth forest. Boardwalks wind around stumps and brush.

Mountains of slash have accumulated on the outskirts, often piled as high as three storeys. The smells of fresh-cut lumber mingle with nostril-tingling smoke. A few thousand people are used to it.

Shortly, much of this town will disappear in less than a half a day when a small brush clearing fire will turn into a blazing inferno. Most citizens will lose everything except for the clothes on their backs.

Survivors will retain vivid memories of the catastrophe. They will celebrate its anniversary, gathering every year until those who had lived through it, pass away. 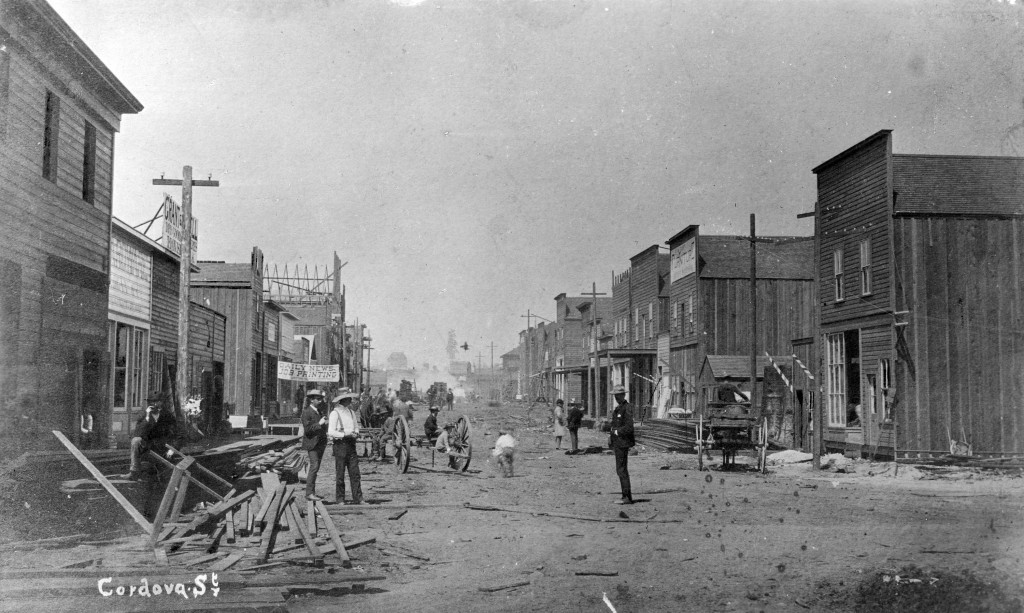 Now Lisa Anne Smith has scoured the city’s archives for eyewitness accounts and photos from the era to produce Vancouver is Ashes: The Great Fire of 1886 (Ronsdale $21.95), the first detailed account of that disaster. It’s a ‘you-are-there’ narrative that documents the Before and After of a largely under-recognized tragedy in Canadian history.

Vancouver, originally named Granville, was little more than a work camp serving the logging industry. “For over twenty years, the steady rasp of the crosscut saw has cut a wide swath into the thick stands of ancient-growth forest flanking the inlet. An ingenious system has been developed for speeding up the pace of work. The tallest trees are sawed strategically to knock down partially-axed surrounding trees as they fall, like a giant line of dominoes.

“Try anything, but ‘get it down,’ is the prevailing mindset…. Felling, slashing and burning continue relentlessly from dawn to dusk.”

Logging continued at such speed that it outpaced the burning of the slash and stumps left over. The slash piles amounted to a calamity waiting to happen. “Vancouver is sweltering. Late spring has been abnormally hot for the past three weeks. Puddles, normally knee-deep along busy Carrall Street, have long since dried up. The few remaining mud holes are blistered and cracked like paint on an ancient canvas.”

It was a Sunday when the clearing fire near the end of Davie Street at False Creek (close to the present-day Roundhouse Museum in Yaletown) flared out of control, whipped by a rogue wind from the waterfront. Many were at church ahead of  sitting down to the best meal of the week. “In elite residences on the eastern side of the city, servants are hard at work throughout the morning preparing the meal while their employers attend church. From the cavernous interiors of wood-burning stoves, a mouth-watering array of courses emerges – new spring potatoes nestled alongside a roast beef dripping with gravy, freshly caught salmon, duck with currant jelly and croquettes of rice – all to be placed upon oak dining tables spread with fine Irish linen, silverware polished to a glossy sheen and the most extravagant of English bone china.

“Other households tuck into simpler fare – slices of homemade bread with spring lettuce or home-cooked strawberry conserve, slices of cheese — all washed down with a cup of hot tea or coffee from the kettle permanently occupying the stove back burner.”

One of the men fighting back the flames, George Cary, is sent downtown for help. Rushing into one of the many Water Street saloons, he confronts the Chief of Police with the news. The Chief of Police, perhaps in an early state of inebriation, waves his hand dismissively. George Cary runs from the Cambie and Cordova clearing site towards Burrard Inlet, more concerned with staying alive than joining efforts to save the Regina Hotel…

Having rowed to the safety of the dock at Hastings Mill, Mayor MacLean is relieved to find his city clerk, Thomas McGuigan, alive and able-bodied. He writes two telegrams for McGuigan to take to New Westminster, galloping on horseback. One will be sent to mayor of Toronto; the other will go to Ottawa:

To: Sir John A. Macdonald. Our city is ashes. Three thousand people homeless. Can you send any government aid?

By 11 a.m. on the following morning, under the supervision of New Westminster coroner Josias Charles Hughes, a jury of twelve men gathers in a makeshift morgue to attempt to identify the bodies. “Owing to the largely transient population of Vancouver,” Smith writes, “a precise count of the dead and missing will prove to be a hopeless task.”

Some bodies are charred beyond recognition. A woman’s body is found at the corner of Powell and Columbia with her torso still encased in the steel frame of a corset. More bizarre, a blackened skeleton was discovered in the ashes of the McCartney brothers’ drug store. It’s the remains of a Swede who hung himself in Moodyville two years previously.

“Desiring to set up a display skeleton for the small school of anatomy that he had recently established in his office and surgery above the drug store, Dr. Henri Langis had rowed over to a small graveyard on Deadman’s Island and quietly exhumed the remains… ‘Jimmy,’ along with other unfortunate souls having no known family or friends, will be solemnly buried in a unmarked grave.”

Lisa Anne Smith is an education docent at the Museum of Vancouver and a member of Native Daughters of B.C., owners and operators of the Old Hastings Mill Store Museum (the oldest building in Vancouver), at the foot of Alma Street in Kitsilano. That’s where the book launch was held for Vancouver is Ashes: The Great Fire of 1886 in late May. Many Vancouverites in 1886 fled to this same building for refuge during the fire when it was in its original location on Burrard Inlet near present-day Gore Street. The literary event event included some descendants of Vancouver settlers who survived the blaze.

2 Responses to “The fire that decimated Vancouver”