More to Tahiti than Paul Gauguin

As an anthropologist, Monique Layton wanted to show how and why eighteenth-century Otaheite became twenty-first-century Tahiti. Consequently she wrote The New Arcadia. Tahiti's Cursed Myth (FriesenPress $21.95). 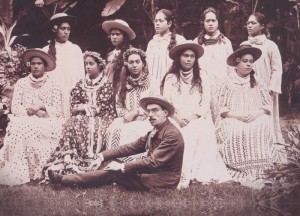 Cover image from The New Arcadia: Tahiti's Cursed Myth -- a tourist poses with the local belles

“I started reading,” she says, “and soon fell in love, totally in love, like a teenager.”

The initial reason Monique Layton became interested in French Polynesia was escapism. Having spent about five months in hospital and nine months in rehab following a serious accident, she had started to research and write an ethnography of hospital life–a tad depressing but within her wheelhouse as an anthropologist.

“Then one day, straight out of the antipodal part of my brain,” she says “came up the word Tahiti…” All she knew about it was the cliché of palm trees, beaches, dancing vahines. “I started reading,” says, “and soon fell in love, totally in love, like a teenager. I was in pretty weakened condition, it’s true, but it was definitely love.” Monique Layton (reading about Tahiiti while in Tahiti)

She went twice (2012 and 2014) and even practised speaking French with a Tahitian accent once she heard it spoken on the islands. Due to limited mobility, she can’t see as much of the archipelago as she’d like, but she intends to return.

“The Tahitian reality is often grim,” she says, “but the mirage somehow endures.

As an anthropologist, she wanted to show how and why eighteenth-century Otaheite became twenty-first-century Tahiti. Consequently Layton has self-published The New Arcadia: Tahiti’s Cursed Myth (FriesenPress, 2015).

Most remarkable of all is the enduring Ma’ohi culture’s survival into the twenty-first century. Evidence of its former potency still remains.

For instance, the Taputapuatea marae (on the island of Raitea) was one of the most sacred places in Polynesia.”Tapu” means taboo, sacred. Thus the Taputapu at the beginning of the word means twice  sacred. Taputapuatea marae is one of the vestiges of a once-thriving, pre-contact, culture.

“Unfortunately, Polynesians were not builders,” says Layton, “and a few black stones only attest to the sanctity of these marae, most of which have been restored by the French. They were used for all religious and social occasions. At the back, the platform shows some carved panels, the unus.” According to Layton, since being “discovered” in 1767, Tahiti has been branded with “the irresistible dual myth of the Noble Savage’s harmonious Arcadian life and of the vahine’s amorous favours freely granted.

People (navigators, missionaries, whalers, slavers) and events (deadly epidemics, atomic testing, and now tourism), all have contributed over time to creating the modern Tahitian quandary: trying to recover an idealized past and losing the benefits of modern life, or continuing as a cog in the French administrative system and losing her soul.” This expensive, faux-primitive resort is what most visitors experience when they realize their dream of reaching Tahiti.

Also as a cultural anthropologist, Monique Layton produced Street Women and the Art of Bullshitting (Webzines of Vancouver) based on 1970s research that led to a 1975 B.C. Police Commission report called ‘Prostitution in Vancouver (1973-1975): Formal and Informal Reports’, as well as a doctoral dissertation. 978-1-926820-20-0

Street Women and the Art of Bullshitting (Webzines of Vancouver)

One Response to “More to Tahiti than Paul Gauguin”