C is for Charlie, not the French one 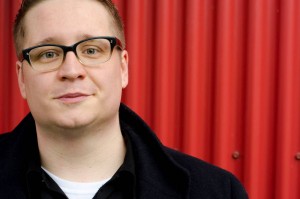 Move over Bill Richardson. Having hosted the BC Book Prizes on several occasions, Charles Demers has re-entered the literary world with The Horrors:  An A-to-Z of Funny Thoughts on Awful Things (D&M $24.95). The comedian gives new meaning to a 26-er by starting with “A” for “Adolescence”, recalling his sexless teenage years in a Trotskyist sect. “B” for “Bombing” recalls the sickening sensation of knowing your comedy act stinks. “D” is for “Depression.” “F” for “Fat.” “J” for “Junk Food.” “M” for “Motherlessness.” And so on. Born and raised in Vancouver, Demers’ wrote a novel, The Prescription Errors (Insomniac Press 2009), that was soon followed by a “no-holds-barred look at Lotusland” entitled Vancouver Special (Arsenal, 2009), a critique of neighborhoods, people and culture, featuring photography by Emmanuele Buenviaje. Demers’ short essays are born of the friction between estrangement and engagement; his loyalty to the city is ambivalent but inescapable. Or as his friend Kevin Chong wrote in an endorsement, “It’s only fitting that a city with so many unlikely facets–its conspicuous wealth and conspicuously ignored poverty, its inscrutable WASPiness and inscrutable Asian-ness, its left-wing face and right-wing heart–should be both celebrated and excoriated by a writer with such multifarious abilities.” Demers’ concluding chapter ‘Vanarchism’ cites his affinities to the likes of philosopher George Woodcock, punk rocker Joe Keithley, labour historian Mark Leier and APEC protestor Jaggi Singh. Since 2010, Demers has been a regular performer on CBC Radio One’s The Debaters.