When William Alexander Smith changed his name, there was much derision. They asked, “Why not Amor Muggins De Cosmos or Amor De Cosmos Caesar?” 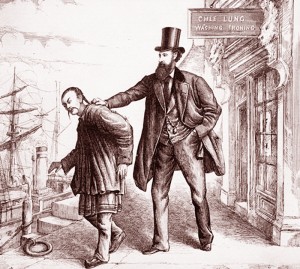 This 1879 cartoon depicts Amor de Cosmos telling a Chinese immigrant to leave B.C. because he refuses to assimilate. “You won’t drink whiskey, and talk politics and vote like us,” he says.

Since Amor de Cosmos, B.C.’s second premier, played such a large part in the annals of British Columbia, it is surprising that no full scale biography has appeared since George Woodcock’s Amor De Cosmos: Journalist and Reformer in 1975. Now, forty years later, Gordon Hawkins makes up for that omission wth a judicious and compelling portrait.

Hawkins pays close attention to that extraordinary pseudonym chosen by an ambitious 29-year-old, from humble circumstances. It was in California when he shed the humdrum name of William Alexander Smith in favour of Amor De Cosmos, a change that had to be approved by the California legislature.

The legislators who debated the name-change bill were derisive. They asked, “Why not Amor Muggins De Cosmos or Amor De Cosmos Caesar?”

Slightly off-key, linguistically mismatched, with the middle “de” word capitalized, Amor De Cosmos suggests either a pretentious attempt to sound erudite or a simple preference for the unorthodox.

Hawkins concludes this name change was “the first identifiable sign of an arrogance that, like his impatience and impetuosity, was to grow with time.”

Even today we can’t help wondering, shouldn’t it be “lover of the world” rather than “love of the world?”

For all his bombast, histrionics and flaws, Amor De Cosmos made contributions to his province and his country that remain significant. He was so ahead of his time that he qualifies for that overused word “visionary.” For instance: For a brief fifteen months, Amor De Cosmos served as premier of the province and for several years he represented Victoria in the House of Commons. He was a major player in creating British Columbia and ensuring the province joined Confederation rather than the United States. He clearly foresaw Britain and Canada joined together in a Commonwealth. But while De Cosmos can be credited with ensuring B.C. joined Confederation, he was not above the prevailing racism of his times.

As Hawkins reveals, the chief motivation of Amor De Cosmos was always his hatred of unearned privilege and his scorn for “our parvenu aristocracy” who “might take a mushroom for a coat of arms.” Not surprisingly, his arch enemy was Governor James Douglas and his cohorts. De Cosmos accused Douglas’ cronies of “toadyism, consanguinity, and incompetency.” As a biographer, Hawkins is particularly good on this relationship, seeing Douglas, a man of mixed race, straining exactly like De Cosmos to maintain a dignified and impressive persona. The two betes noires, he suggests, were mirror images of each other.

Gordon Hawkins, an indefatigable researcher, traces his subject from his early days in Nova Scotia where his restiveness as a clerk in the grocery business was apparent.

In describing his arduous journey from Nova Scotia to California via Salt Lake City, Hawkins deftly separates facts from myth. De Cosmos lingered in California working as a photographer, until news arrived of gold to be found on the Fraser River.

With an eye always on the main chance, he was one of the first arrivals in Victoria. He hopped briefly over to the mainland but quickly returned to Victoria, where he spent the rest of his life.

Although his land speculations set him up for life, De Cosmos needed a channel for his combative political views and his flair for expressing them colourfully. Newspapers were in such demand at the time that ten newspapers were started in the city between 1858 and 1860, though few lasted very long. The first issue of his British Colonist, with a print run of 200 copies, appeared five months after his arrival. The mission statement was “to foster relationships with the mother country.” His chief target was James Douglas. To prevent a particularly scurrilous attack, his victims tried to shut down the paper by invoking statutes requiring 800 pounds be posted as libel insurance. This was thwarted when the paper’s supporters held a public meeting and raised the required sum. The controversy increased the circulation to 4,000 copies.

At this point De Cosmos found an even more satisfying outlet for his skills—he became a professional politician. While the ruling elite scorned him as a semi-Yankee adventurer and a man of no breeding, he won a sizable following to his reform platform that included his fight for freedom of the press, true justice and responsible government. Under his influence, the political arena of B.C. became theatrical, the best entertainment in town, with De Cosmos in his unchanging, all-black garb as the leading performer. Like many consummate politicians, he had discovered that operating in the public arena masked his failures in personal relationships. On stage, he was amazing; close up he was irritating, difficult to like. He was anti-social, humourless and had few friends. B.C’s first agent-general in London noted that it took a couple of bottles of Napoleonic Chambertin before he could relax and converse normally. His capacity for bitterness and anger was huge.

At the end of his life, his mental state deteriorated to the point that a guardian was appointed to ensure his safety. Was there always an underlying psychological disturbance that in later years was aggravated by the lack of recognition that was his due? Or had the toxic chemicals used in his days as a photographer affected his brain?

George Woodcock suggested that his symptoms were those of manic-depressive psychosis. Gordon Hawkins sets out all the possibilities but concludes that his subject ultimately remains an enigma.

Above all, Gordon Hawkins insists that the weaknesses and idiosyncrasies of Amor De Cosmos should not overshadow his achievements. This sympathetic and serious portrait amply succeeds in restoring to Amor De Cosmos the respect that he deserves.