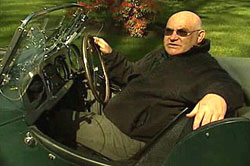 As a long-time automotive journalist who has driven about fifty cars per year for thirty years for work, the veteran car enthusiast Ted Laturnus has restricted himself to his love affairs with a vast array of vehicles of all makes and models for which he’s bought insurance–include a 1992 Ford Tempo and a motorcycle that was part of a near-death experience when he was struck by a daft motorist–for a self-published “auto”-biography called A Sentimental Road Trip (Driver-Seat Press 2015), his third book. It includes a chapter about the time Laturnus contacted his favourite poet, Charles Bukowski, and brought him to Vancouver for a successful poetry reading in 1976. It was Bukowski’s first-ever trip outside of the U.S.

Also the author of Floating Homes, Ted Laturnus was named Canadian Automotive Journalist of the Year two years in a row. With Tony Whitney, he previously co-hosted CBC’s Driver’s Seat which became a widely-syndicated program across North America before he left the show after ten seasons. He and Whitney co-authored Ted and Tony’s 1992 Car Book. Ted Laturnus is a past president of the Automobile Journalists Association of Canada. Also a drummer, he played in a rock band called Close Quarters.