Don’t bet against her

The odds were that former realtor-turned-novelist Donna Milner wouldn't thrive off-the-grid in the Chilcotin. 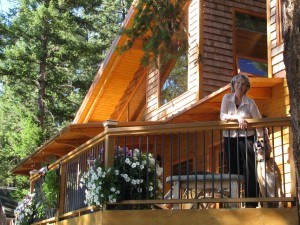 Donna Milner's "writing room" turned into a new house where she has written three more novels.

Upon the publication of Donna Milner’s first novel, After River—since republished in twelve countries and translated into eight languages—Milner’s husband, Tom, decided to build her a “writing room” on lakeside property in the Chilcotin that he’d owned since the 1970s.

He envisioned a one-room cabin below his rustic old cabin. By the time construction had started, plans had evolved to build a year-round residence and Milner agreed to try living off-the-grid for one year. The couple sold their four-thousand-square-foot home and moved to an area without power lines where they would rely on solar panels and a gas-fired generator for electricity. Communication and internet access would only be available via satellite. The construction crew took bets that she wouldn’t last the year.

Eight years after that, still in the Chilcotin, she has released her fourth novel…

The protagonist of A Place Called Sorry (Caitlin 2015), Adeline Beale, grows up in the 1930s leading a sheltered life. Her grandfather Chauncey Beynon Beale believes his cattle ranch can supply Addie with everything she could want or need. Twelve miles away there’s a little town called Sorry. Life is simple–but tragedy and secrets intervene. When her grandfather slips into blindness and dementia, Addie’s life darkens, too. There’s no such thing as a sheltered life when family secrets are allowed to fester. Milner’s debut novel After River (HarperCollins 2008) is about a woman coming to terms with the disintegration of her family some 35 years after a young American draft resister named River crossed the border into Canada and changed their lives. Prejudice against the gentle River Jordan in a rural B.C. community mixes with the fear of homosexuality, leading to the rape of the teenage protagonist, 15-year-old Natalie Ward, daughter of the town’s milkman. The novel was shortlisted for two awards and published in twelve countries.

Donna Milner’s second novel The Promise of Rain is about a motherless daughter dealing with the after-effects of her father being captured as a prisoner-of-war in Hong Kong. “By the time I was six years old,” writes the narrator Ethie, “I knew my father was not like other fathers.” Narrated by a former realtor, Donna Milner’s highly credible Somewhere In-Between (Caitlin 2014) follows the efforts of a couple to purchase an idyllic but remote ranch in the Chilcotin. We gradually learn they are attempting to recover their marriage after a tragic family loss. Julie O’Dale tries to support her husband Ian’s dream to escape from the big city in favour of the company of a team of draft horses, four cow ponies, and the range cattle. Trouble is, their six-hundred-acre ranch includes one very problematic, long-time tenant, Virgil Blue, who doggedly occupies an old trapper’s cabin. This novel was slated to be published by McArthur & Co. before that Ontario firm went belly-up.

Born in Victoria in 1946, Donna Jonas Milner was raised in south Vancouver before moving to Rossland where she married and started a family. She also worked as a real estate agent for 25 years. Upon retirement, she decided to pursue her life-held ambition of becoming a dedicated writer.