An opera has been written about Emperor Pick, aka “Alberta’s Al Capone.” 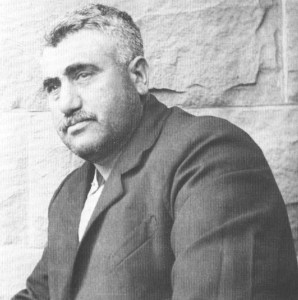 Emilio Picariello of Fernie became notorious as a murderer--but he was likely framed.

From ice cream to bootlegging, Emilio Picariello’s life story has the makings of a Bonnie & Clyde movie—if you don’t stick to the truth.

In her portrait of a patriotic bootlegger, researcher Adriana Davies prefers sobering reality to fanciful drama in The Rise and Fall of Emilio Picariello (Oolichan $19.95), a thorough investigation of the Sicilian-born British Columbian who had a reputation for being something of a Robin Hood figure.

His is a tragic tale that cries out for a Puccini. In Act One, the Italian immigrant works as an ice cream vendor in Fernie. In Act Two, he becomes a successful bootlegger. In Act Three, he descends to infamy in the gallows of Alberta.

Adriana Davies assiduously paints a clear portrait of the man who was widely known as Emperor Pick; and along the way she discusses the prejudices Italian immigrants had to overcome in B.C. during the early 20th century. Florence Lassandro was mercilessly hanged for the murder of a policeman that she almost certainly did not commit.

Our rags to riches tale begins when Emilio Picariello of Fernie began to collect bottles. He introduced a policy of allowing children to trade bottles for ice cream. While establishment figures viewed him as a “junk man,” the local breweries found it easier to buy back their bottles from Picariello than buy new ones.

The passage of Prohibition on October 1, 1917 in British Columbia—after it had been passed in Alberta on April 19, 1916—offered an opportunity for expansion that Pacariello could not pass up. As well as providing liquor to B.C. citizens high and low, Picariello and his cohorts began running alcohol into Alberta.

“Picariello’s extensive bootlegging business was an open secret,” writes Davies, “known among both the immigrant community and the British elite, who did not socialize with him but who, nevertheless, ordered liquor for weddings and other occasions.”

Along the way, Picariello took pride in community service and philanthropy. “Picariello also had a patriotic streak,” writes Davies, “and contributed to the war effort through the purchase of Victory Bonds. He lent money to needy individuals, as well as the local church and, at the time of the 1918-1919 General Strike, is said to have delivered groceries to those affected.”

In the aftermath of a failed sting operation set up by the Alberta Provincial Police in 1922, during which he learned his eldest shot had been wounded, Picariello got into a heated argument with Constable Stephen Lawson. They fought, shots were fired. Some say the gunmen were cops. The alleged shootout led to his 1923 execution for murder of a policeman. Also executed was his female employee, Florence Lassandro, who had been with him his car when the altercation occurred.

When Picariello and Lassandro were hanged in Fort Saskatchewan, convicted of murdering Lawson, she became the last woman executed in Alberta—by which time she was already notorious. The public was not averse to assuming the possibility that Lassandro could have been either the father’s mistress or the son’s sweetheart. In happier times, the bootlegger’s wife Maria Pacariello and Lassandro

“Very little ink was given to Florence Lassandro, at the time,” writes Davies, “other than observations that she was a “waitress” before her marriage and that she was not Picariello’s “daughter” as some papers had reported. She would later be referred to as his mistress or that of his son Steve, who was five years’ her junior.”

Andriana Davies revisits the trial as a cold case, suggesting that bigotry had much to do with Picariello’s demise. Davies reports that Picariello’s family believe that authorities initially tried to get Picariello to plead guilty to the lesser charge of manslaughter, but he refused, insisting that he was innocent.

Davies has eschewed any romanticized notion that the two convicts were intimate. Instead we learn that twenty-two-year old Florence Lassandro became deeply depressed during her incarceration, on the verge of collapse. The Fernie Free Press described her as “a pale, weak little creature, the object of hundreds of curious eyes.” Ostensibly the promise of an afterlife and Christ’s forgiveness provided comfort.

During the trial she had recounted that there was a struggle between Picariello and Lawson for a gun. She saw the flash of a gunshot going past her leg and also of shots in the alley. She asserted that she only cared for Picariello’s son Steve as a brother—ie. there were no sexual entanglements—and that she had not had the gun in her hands. She was somehow convicted of murder nonetheless.

One theory for the bizarre conviction is that, on the morning of her arrest, Lassandro had agreed “that it would be best for me to take the responsibility and say that I did it as women don’t hang in Canada and he would get off.”

Regardless of what really happened, the double execution of Picariello and Lassandro has made them into legendary fodder for art.

“Both Pollock and van Herk,” writes Davies, “reinterpret the story of Picariello and Lassandro in the context of the 1980s and early 1990s academic criticism dealing with sexual politics and post-colonialism.”

John Estacio and John Murrell’s Filumena is an operatic recounting of the Picariello/Lassandro story developed as a collaboration between the Banff Centre, where Murrell worked, and the Calgary Opera Company, where Estacio was composer in residence. The opera was performed in February 2003 in Calgary and at the National Arts Centre in Ottawa in 2005.

“In literature,” Davies concludes, “women are frequently either madonnas or whores. This, sadly, is also true in life. Lassandro started as a whore in the media at the time of the trial and, in the more recent accounts, she is somehow sanctified.”

*
Prohibition in Canada started in Prince Edward Island in 1901. Manitoba and Ontario followed suit in 1916. Next came British Columbia and New Brunswick in 1917. Federal legislation was enacted by an Order-in-Council of April 1, 1918. It became a part of the War Measures Act. Thou Shalt Not Sell Booze. Quebec passed anti-booze laws in 1919; followed by Nova Scotia in 1921.

One Response to “Take your Pick”