They called her Number One

After winning both the Roderick Haig-Brown Award and the Hubert Evans Non-Fiction Award at the B.C. Book Prizes in May for his biography of architect Arthur Erickson, David Stouck was quick to tell anyone who wanted to listen, “I think Bev Sellars deserved the Evans Award.” 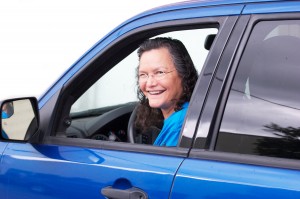 Bev Sellars has provided the first book-length account of abuse that occurred, for generations, at the St. Joseph’s Mission Residential School in Williams Lake. She is profiled here by Leslie Hill.

Given that Bev Sellars’ memoir, They Called Me Number One: Secrets and Survival at an Indian Residential School (Talonbooks), had topped the B.C. Bestsellers List longer than any other title in recent memory, Stouck, a retired academic and rare specialist in B.C. literature, was probably not alone in his opinion that Bev Sellers was deserving of the province’s top non-fiction honour, the Hubert Evans Prize. She had already received the George Ryga Award for Social Awareness.

Here, Leslie Hill—herself something of a survivor from a fractured marriage—caught up with Bev Sellars in Kamloops and provides this profile.

Bev Sellars, Chief of the Soda Creek Band near Williams Lake, frowns down at the unsteady table where she’s sitting between the library and the Art Gallery in Kamloops. She’s still the right side of sixty, her shoulder-length dark hair curly and free of grey, and her brown eyes smile easily when she’s not worried. She’s here in Kamloops to see her brother, Mike, who is living now in a nursing home.

“Mike can’t walk. He’s had too many injuries after all the years of living on the street and he’s got dementia in the early stages,” she says. “The court sent him to rehab once for thirty days and he looked good when he came out. Healthy. I asked if he’d be off the drink for good. He said he liked waking up without a hangover but sobriety left him thinking too much about the past. He said he’d rather drink than remember. So he wasn’t sober long.”

The memories that haunt him are of his years in St Joseph’s Mission Residential School. At least seven of the Sellars kids, their mother, various aunts and uncles, as well as their grandmother attended the school and suffered physical, mental and emotional abuse. Sellars thinks both Mike and Bobby, the brothers closest to her, were sexually abused too, although they would not talk directly about it.

Bobby tried to run away once and was brought back by the police. “I remember the way Bobby’s head hung as he was walking towards the boys’ side of the building. I felt really bad for him at the time, and now I realize that look was one of a broken spirit. There was nothing he could do to end the sexual abuse, and I have to wonder if, like many others at the school, he was being abused by more than one person.” Bobby died at eighteen, his body found in a creek at the base of a cliff. There was nothing to indicate whether his fall was accident or suicide.

Unlike her siblings, aunts, uncles, mother and grandmother, Sellars has faced her memories and tried to deal with her past. She told her story to the Truth and Reconciliation Commission, established in 2008 to compile a survivors’ history of Canada’s notorious Indian Residential Schools. She has also written a memoir, They Called Me Number One: Secrets and Survival at an Indian Residential School, an account of the impact of her residential school years. The book won the George Ryga Award for Social Awareness and was shortlisted for a Hubert Evans Non-Fiction Prize.

Bev Sellars herself credits self-help books and her grandmother for her survival. For years after she had left school, she believed White people were superior to Aboriginal people. “I was emotionally and socially crippled in my ability to deal with the world.” She drank, endured a dysfunctional, abusive marriage and was afraid to leave the reservation. Then one day while waiting for the Laundromat cycle to finish, she picked up a copy of Norman Vincent Peale’s Discovering the Power of Positive Thinking. She was twenty-eight. “Finding that book was like discovering a gold mine … I started to understand myself, and later, to understand the actions of my family… Over the years the bitterness I felt for some of my family melted away.”

When asked she will say she had a wonderful childhood, because she chooses to remember the summers and the Christmas holidays, rather than the months and years she spent at St. Joseph’s Mission. She and Mike and Bobby lived with their grandparents. Her grandmother refused to allow alcohol in the home. If the men wanted to drink, they had to leave and drink elsewhere. So Sellars never experienced firsthand the horrors of a family destroyed by alcoholism when she was young.

But the memories of residential school don’t go away. Alcohol, as Mike discovered, will blur the residual shame, humiliation and pain. When Sellars was fourteen she returned to live with her mother and alcoholic stepfather. During those years she drank, too. “When I left my grandmother’s home physical abuse from other family members started. When they were drinking and their frustrations came out, they vented on those close to them. Sometimes I was closest.”

She dropped out of school at sixteen and spent her time partying. One night as she grabbed a drink, she saw how automatic the action had become. “It was like a slap in the face…While I was reaching for that beer, I experienced an epiphany that would change the way I viewed drinking… No one drank socially in our community at that time. It was blackout bingeing or nothing.”

Her marriage at seventeen offered more pain than happiness almost from the start, but she stayed for fifteen years. Why so long? “The violence began with the years I spent at the Mission. Physical abuse became an accepted way of life for me. The nuns and some of the other kids contributed to it. This prepared me to step right into an abusive relationship with my husband.”

Violence, she says, is an expression of the hopelessness Aboriginal people feel because of the destruction of their culture through the Residential School system. “Suicides were sometimes ‘the answer’ when things got too tough.” She survived her own suicide attempt at seventeen. “Now when I look back I see that I felt an extreme sadness in my soul … I was mentally ill because my experiences to that point had been so negative.”

Most non-Aboriginal Canadians knew nothing of residential schools. Public schools didn’t teach this chapter of Canadian history and the Anglican, Catholic, Presbyterian and United Churches stayed quiet about their role. For more than one hundred years the federal government had coerced parents into co-operation by taking their children away for ten months of the year while the Church-run schools tried to “kill the Indian in the child.” Starvation, disease, physical, emotional and sexual abuses were rampant in the schools. Then in the 1990s the First Nations’ lawsuits against the government and churches that ran the schools gave birth to the Truth and Reconciliation Commission. Canadians got an educational update.

Eventually Sellars went back to school, obtained a law degree and was elected chief of her Soda Creek Band in the early 1990s. A University of Guelph study encouraged the Aboriginal communities in the Williams Lake district to look at the roots of their social problems. Everything pointed back to the residential school experiences. Almost no one wanted to revisit their school years but under pressure Sellars began to make notes of her memories. It was the genesis of They Called Me Number One and a big part of her own healing.

“I cried; I cried, cried, cried thinking of my family and the pain they must have lived with all their lives. It really affected me. When I started understanding myself I could look at my mother’s life. It’s amazing she didn’t end up in the loony bin. The understanding takes away the bitterness I felt.”

When the book was published in 2013, Sellars anticipated the kind of hate mail that had come after the University of Guelph reports on St Joseph’s Mission School in the 1990s but the response to her book has been positive. Residential school survivors have said: “that’s my story; that’s how I felt”. The generation that escaped the residential school horrors said: “thank you; now I understand my parents better.” Schools and libraries are asking Sellars to talk about the effects of her years in St. Joseph’s Mission. West Point Grey Academy in Vancouver invited her to speak at their Aboriginal Awareness Day.

Chief Bev Sellars presented her memoir, They Called Me Number One to Canada’s Truth & Reconciliation Commission as part of the public archive.

The five-year mission of Canada’s Truth and Reconciliation Commission has been to “reveal the complete story of Canada’s residential school system, and lead the way to respect through reconciliation … for the child taken, for the parent left behind. To establish a renewed sense of Canada that is inclusive and respectful, and that enables reconciliation.”

Does the Truth and Reconciliation process mean things will improve? Sellars hesitates. She thinks that it’s important that non-Aboriginal people hear the stories and she was impressed that students came up from Oregon to listen, that 70,000 people listened to speeches and paraded in support on the last day of the TRC hearings in Vancouver. But the 1996 Royal Commission on Aboriginal People published a report which included a twenty-year agenda for implementing changes. “There is some excellent work there and yet nothing has really changed,” Sellars says. “So I’m not sure the TRC will make a difference.”

Time might. Sellars quotes from The Historic Trauma and Aboriginal Healing booklet that says traumatic events need to stop for a period of forty years before socio-cultural reconstruction and healing begin. Aboriginal people haven’t yet had forty years to recover from five hundred years of non-Aboriginal diseases, expulsion from homelands, loss of economic self-sufficiency, removal of children from their homes, assimilation tactics and incarceration in prisons and residential schools.

What does she want to see happen? The 1876 Indian Act, which keeps power out of the hands of the people and in the hands of government, should be repealed. The government moves slowly, if at all. Non-Aboriginal people need to join First Nations to bring about change.

“Aboriginal people need to control their own lives. We have to be able to make our own mistakes. We need the resources to develop programs that we know we require. Not every community has the same needs. You always have to have hope and I’m hoping the TRC will mean change. That there will be enough pressure on the government to make them realize they have to deal with Aboriginal people justly and fairly.”

Meanwhile, memoirs, fiction, poetry and children’s books written by Aboriginal people are entering the market and making the bestseller lists. “Some White people know more now,” Sellars smiles, a little sadly. “You always have to have hope.”

Born in Toronto in 1949, Leslie Hill has lived in Vancouver since 2004. She taught English and Library Skills in Toronto high schools for 25 years before moving to the Findhorn Foundation in Scotland for almost six. In 2008, she graduated from Simon Fraser University’s Writers Studio program in creative writing. She has self-published Dressed for Dancing: My Sojourn in the Findhorn Foundation (Incite Press, 2012). Her essay on grief was published in B.C. BookWorld in 2012.